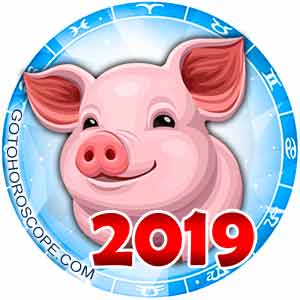 Astrology forecast for the 2019, the year of the Yellow Earth Pig

Read the overview of 2019 the Pig year, and 2019 Horoscopes for twelve Zodiac signs. Is 2019 a beginning of a new dawn or the first sign of an apocalypse? Will 2019 be successful for your Zodiac? Let's see what your 2019 horoscope foretells...

The horoscope for 2019 AD predicts that the 2019th revolution of our planet around the Sun will be a time full of hugs and handshakes...

... Pig patronizes this year according to the Chinese astrological calendar. However, the Japanese believe that the Boar will guide the year, while Thai people believe in the Elephant's protection. Regardless, these different beliefs do not change the essence of horoscopes. We are expecting a year when everything and everybody will get closer on both the physical and emotional levels, the carefree and pragmatic behavior will be exhibited as well. This combination might seem quizzical but it is confirmed by the conclusions of astrologers from the European school of thought.

2019 will be under the powerful influence of the Sun, Mars and Earth. The Earth will be in a dominant position relative to Mars, which means that the aggression and cruelty of the Red planet will be quite limited. We will feel its influence only through elevated levels of assertiveness and unrestrained dynamics. In other words, the confrontation will be replaced by attempts to get closer. The Year of Pig 2019 will be favorable for the restoration of old connections and for the establishment of new ones.

2019 is expected to be bright, filled with an active and open desire to live, create, and enjoy life in all its manifestations. Many people will stop thinking about tomorrow and begin to appreciate what they have in this particular moment. It will not make us much happier, but it will rid us of the oppressive feeling that comes when you are expecting troubles from all sides. If earlier in 2018 everyone was engaged in spiritual search and painful attempts to discern good from evil, in 2019, regardless of personal choice, each of us will turn towards the reality of his personal existence.

Everyone will find order in life, working to mend all personal relationships by forgiving and moving forward. Creative and innovative persons will start devising with new gadgets, while those ones inclined towards humanities will explore their feelings and ideas. In other words, we can expect a boom in innovation in all fields, and poets may become extra productive in their work as well.

This development will positively influence the business sphere where interpersonal relations will proceed in a very successful manner as well. In other words, anyone who wants to start or expand his personal business can easily go ahead and do that, and those who have the time to create a family should not be afraid of doing so. There are also good chances for those striving for physical improvement. All athletes will reach the peak of their form by the middle of the year, and those wishing to get in shape will get much closer to their aspirations. It is important to remember that all this will be achieved through constant exercise and balanced nutrition. You should not put any restrictions on yourself in 2019, and the occurrence of positive events will be concentrated in the material world.

According to the horoscope, 2019 will be extremely favorable for those born under the Water signs: Cancers, Scorpios, and Pisces. However, the most favored ones will be the signs of the so-called 'fixed cross'. In the western astrological system, 'fixed cross' signs are Taurus (Earth), Leo (Fire), Scorpio (Water), and Aquarius (Air). Representatives of the triads strongly embody the power of the element to which they belong. In practice, this favoritism will primarily be displayed by the fulfillment of the wishes of the most cherished ones. The Universe itself will work hard on this. In one old move called An Ordinary Miracle there is a scene when one of the wizards tries to reconcile the lovers, and he describes the way he did it saying this: 'I brought them to this hotel, and then I decided to pile the snow on the entrances of the hotel so that they could leave it for a long time.' The circumstances will work for these signs' favor in the same way: you will end up winning anyways. Horoscopes for 2019 recommend you start dreaming, because the train of your desires will start moving in a fast pace soon, not caring whether you are sitting on it or not. Those ones missing it will have to wait for another chance that will come back, though much later.

Looking at 2019 from a numerological perspective, we can confirm that luck is on its way. Summing up the digits in 2019, we get 3: 2 + 0 + 1 + 9 = 3. In numerology the number 3 means inspiration. Given that the state of inspiration usually leads to some brilliant outcomes, we are certain to find luck. Keep in mind that inspiration provides nice results only if it accompanied by clear motivation and hard work. However, the positive result is guaranteed even with minimal effort invested. The patron of this year, the Pig, usually gets everything done in the same fashion - minimum effort with sizeable outcomes. Even idly lying in a pit full of dirt, pigs manage to get some important things done. Scientists claim that by doing so, pigs are getting rid of parasites and achieving balance in their bodies' thermal regulation.

2019 will be a very convenient time for easy advancement along the path of success. Even the hardest work will turn into an exciting game and will develop into something valuable just by itself. Business projects and social programs can be quite successful. This year is considered favorable for building something new, and it does not matter whether it will be something physical like a house or something less physical like a family. However, by building those things you can face certain difficulties - though such struggles are necessary. Not only Mars, but also the Moon (the Queen of sensual confessions), will be in the oppressed state. The Sun being its constant opponent will suppress the energy of emotional reactions. In addition, the planet of communication and trading deals Mercury will be placed unfavorably in relation to dominant planets. We should expect difficulties in the sphere of informational and emotional exchanges, as well as some difficulties in achieving progress while doing business or dealing with politics. However, these difficulties are quite manageable, especially for people who know exactly what they want.

While numerous planets will continue confronting each other, some situations that may potentially threaten your physical health might emerge. This will be nothing serious but make sure to keep an eye on minor injuries and illnesses like catching a cold, getting burnt, or food poisoning due to your own carelessness or negligence. Make sure to follow some elementary norms of safe behavior in your everyday life and at work especially, at the beginning and end of the year.

Because we already brought up some difficulties related to upcoming 2019, we should mention one of the main dangers, which is related to trust. If you look at the nature of this year's patron, which is the Pig, you will see that it is extremely naive and can easily become a victim of some pranks and even outright frauds. Considering the fact that the main events of 2019 will be mostly related to the material world, lies and unfair tricks are likely to take place in the spheres of commodity exchange, finance and personal relationships. The problems are not critical and can be easily detected with a certain degree of caution. You should not give up on trusting people, but make sure to check everything before totally relying on something.

In general, 2019 should be an active time full of creativity. Only a very lazy person will miss a chance of improving his financial wellbeing, but even they will end up getting some bonuses. Horoscope advises courage to go ahead and chase for that 'golden calf,' keeping some necessary prudence in mind.