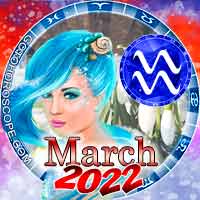 Aquarius has been getting a lot of attention for the past few years and for a very good reason. Late in 2020, we started a big cycle that had your very sign as its focus, and now in March, we're about to hit another pivotal moment in that cycle. With that said, this month is really not the month to sit down and relax. There's much that needs to be done.

Right away, we start with a New Moon happening in your 2nd house of finances ruled by the luckiest planet, Jupiter. This is quite the favourable transit that likely triggers the beginning of a cycle of a positive financial influx in your life. This is especially true for those of you who are 25, 37, 49 or 61. The one thing with Jupiter, though, is that he's also the planet of generosity, so it would be wise to show some gratitude to the Great Benefic to multiply this gain by giving some of it back to the community, especially for non-profit organizations that have children as their focus as he's also the patron of children and youth in general. With Jupiter, the more you give, the more you get back. And in the spirit of selfish-altruism, the Jupiter and Sun conjunction happening shortly after this Lunation can also harness positive attention from these good deeds. This is not to say that you should only give when you know you'll get something in return, but a little mutual benefit is always welcome.

Not long after the New Moon, we have the most significant transit for you, Aquarians. Both Mars and Venus will be changing signs and ingressing into your 1st house of the self, body and identity. This is where Saturn has been transiting through for the past 2 years, which might've brought a wave of low energy, especially for the Aquarius born at night. If this applies to you, having Venus and Mars, the two nocturnal planets entering the 1st house, can be a much-needed boost in vitality. However, it's important to note that Saturn and Mars have a little bit of an uncomfortable rub against one another. While Saturn wants to take things slow, Mars wants to push you past your limits to allow you to conquer your enemies. Be careful not to be too harsh, and jump to forceful ways of tending to your goals and aspirations. It would be much wiser to lean on the powers of Venus to manifest union and peace.

Those two are not the only planets changing signs. We also have Mercury joining Jupiter and the Sun in your 2nd house. This is quite a positive place for Mercury since he is the planet of business, and the 2nd house deals with financial matters. However, the sign of your 2nd house is also one of Mercury's detriment. In turn, his usual rational and thoughtful ways of dealing with business matters can be muddled by emotions, dreams and aspirations. With that said, especially considering that Jupiter is bringing in the cash, it will be wise to avoid emotional spending or agreeing to any business enterprises just because it feels right. Ask for second, third or even fourth opinions before going into any significant business ventures. Jupiter may be providing substantial financial help at the moment, but he won't stay in that house forever, so be sure you're not letting yourself get lost in your own fairytale. Remember that money is of the real world, not the spiritual realm, so practicality is more than invited when tending to these matters.

After Mercury changes signs, he also gains the enormous responsibility of ruling this month's Full Moon falling in your 8th house of other people's money, adding more detail to this narrative. Since they're in your 2nd house, this means that Mercury opposes the home of the Moon he rules, and in many ways, he may be working at cross purposes to what the Moon is trying to bring into your life. This could mean in the heat and excitement of the Jupiterian blessings you're getting this month, you get overconfident and might have a tendency to forget bills or even to write that grant proposal for your next big project. While this is not a significant issue, you have the control to make sure this doesn't happen. Set reminders if necessary.

After the Full Moon, the month comes to a close with Venus and Saturn conjoining in your 1st house. While Mars, who is also there, will do the same shortly after bringing a certain degree of difficulty in the coming month, the end of March on the 28th will be the time to take advantage of Venus' blessings. She's all about peace, and Saturn makes sure it's long-lasting. Since this is happening in the house of the self, you can take advantage of this easier time to prepare for the coming month by having any more complex interactions with your peers at this time. This transit can also be good to sort out difficulties related to your home, family or possible travel plans coming shortly.

March is another step on a major cycle for you, Aquarius, so take advantage of the many blessings being cast upon you at this time.