Overview of 2023 Astrological events that are vital for the fate of the Zodiac sign Gemini during the course of the Black Water Rabbit Year. 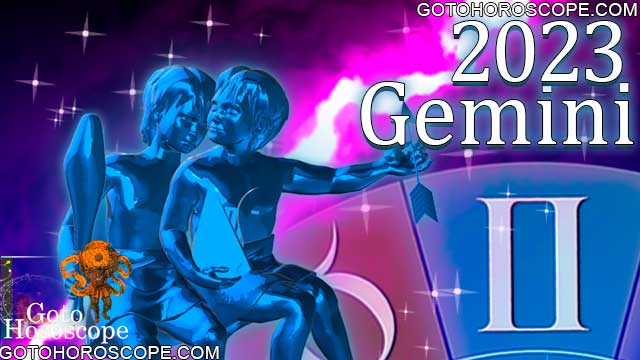 All Geminis out there had somewhat of a rough end of the year in 2022. Especially for those of you who were born at night, the Mercury and Mars retrograde of December left quite an impression. 2023 promises to move you in a more productive direction. There's a lot of change ahead, and for a mutable sign like yourself, that's always welcome.

Before we move on to the big changes, however, we do have to spend some more time with the Mars and Mercury retrograde. As much as the thick of this dual transit really happens at the end of 2022, both planets will continue to move backwards until mid-January.

This is important because the first quarter of the year should be the preparatory changes for some rather life-changing astrological events later in the month. January will be the time to figure out any unfished business, so you don't carry them with you for the rest of the year. With the Mars retrograde happening in your 1st house, the main thing to pay attention to is your health, whether physical or mental. The 1st house is the one closest related to the body, and the Mars retrograde is likely to have pushed the limits of what your "meat-suit" can handle. You might feel restless and overeager to get things done, but it's important to take this January as a resting period more than ever.

The Mercury retrograde that happens in your 8th house is also something to consider. This transit is notorious for generation some issues related to banking, credit cards and loans. It will be wise to avoid making any big purchases until later in the year so you can clear out any and all of your holiday debt or extra expenses.

Still, this is a rather small transit in retrospect, but because this is the way the year's initiated, it's important to pay attention to it so you can go into 2023 feeling confident. All these issues are likely to subside after January 11th, when Mars starts moving forward again, and on January 18th, when Mercury follows suit.

Now that we have covered the foundation of the year, it's time to move on to the big picture. And in many ways, 2023's focus is on just that. Many of the events having their inception this year are just triggers to a much longer journey. The main planets to blame for such towering changes are Saturn and Pluto.

On March 7th, Saturn will be entering your 10th house of career, reputation and action.

The ringed planet is often associated with hard work, toil and difficulty, but more importantly, notoriety and leadership (especially for the Gemini born during the day).

Just by taking a quick look at this oversimplified list of keywords, we can get a sense of the impact of this Saturn transit. Whenever this planet blesses us with important transits, we can take it as an invitation for us to step up our game and try to make a difference. Be ready for a year focused on problem-solving. Saturn's cold touch is usually one to generate a certain degree of distance from our peers and coworkers. For the diurnal Geminis, this can come in the form of a promotion. With a more prominent role, you may begin to display a more intimidating presence to your coworkers, consequently driving them away. For those of you born at night, however, this can be reversed. Perhaps a close friend at work gets a promotion or is different from a distant branch, and now you'll have to learn how to reshape your workplace environment.

Whichever way this transit manifests, you must be ready to learn how to fend for yourself in the workplace.

Now, I did also mention that Pluto would be bringing some changes. However, those are somewhat different. As much as our favourite dwarf planet moves slowly like Saturn, his pace is considerably slower. Usually, Saturn life chapters last about 2.5 years, whereas Pluto goes on for all of two decades on average. For that reason, whenever the Lord of the Underworld casts its rays down upon us, they come in waves.

This year, Pluto will transit through your 9th house from March 23rd to June 11th before it retrogrades back into your 8th house.

The period he spends in your 9th house will foreshadow plenty of adventures to come. The 9th house is the place of spirituality, deeper knowledge and travel. Traditionally, it was even known as the place of God himself. For that reason, you can expect the deepening of these themes in your life. Perhaps some of you will start debating on going back to school or even moving to a different country where you'll have to learn a whole new culture—or perhaps even a new language. Still, like mentioned earlier, this is a 20-year long chapter that is only being foreshadowed. 2023 will plant many of the seeds for these events to develop, but the final move won't be happening until 2025 when Pluto commits to sending you on a 9th house journey. Take advantage of these heavenly hints to research and get prepared for what's to come, but avoid making impulsive decisions since the time might not be quite right yet.

Pluto not only foreshadows the future, but it tells you a lesson about the present. Since it hasn't fully moved into your 9th house yet, we can know that Gemini still has unfinished business left to be sorted out with the topics of the 8th house. When Pluto moves back into this house on June 11th, it's saying that before you move or go back to school, bills, debt or event scholarships need to be addressed first. So if you're feeling impatient and ready to make a big move, tend to those areas first.

Geminis have a lot on their plate moving forward. It's time to get ready to make substantial changes to your lifestyle. Though, this new chapter is so big and different that it's best to take your time to plan it perfectly. Since Gemini is ruled by Mercury, the planet of maths and rational thinking, you're more than well equipped with the tools to make this mission a success. Good luck, Gemini.