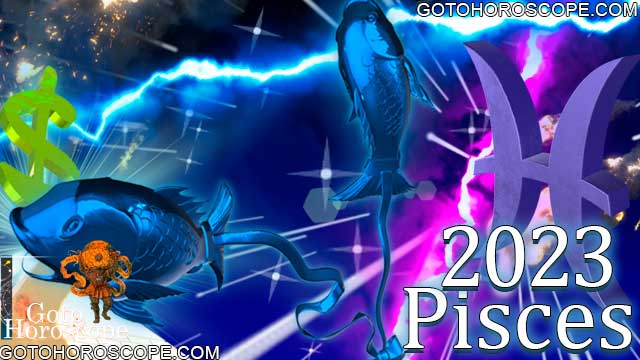 Pisces is the sign of dreams. And in the world we live in, much of the symbolism surrounding aspirations has intrinsic financial connotations. That's perhaps why Mars, the planet of drive and action, is a planet responsible for taking care of your money, enabling Pisces to push past the biggest of hurdles to turn fantasy into reality.

However, this year Mars struggles a little bit, and for that reason, you might want to take the year to dream and plan rather than push forward too much. A conservative approach might be the best way to succeed through the year.

This is because right from the get-go, the year stars with the Mars retrograde of December 2022 are just finishing their very last breaths. This is made even more critical considering that this happens in an angular house in the Pisces chart, the 4th house. This place involves the home and family and everything that is foundational and therefore fundamental for one's development.

Though the Mars retrograde ends shortly after the year's inception, the planet will be moving slowly for most of the first quarter of the year. And in addition to that, due to how your chart is set up, as soon as Mars finishes with your 4th house, he'll go into your 5th, which in Pisces' chart is the place of Mars' fall.

This whole toilsome journey will only end on the 21st of May when Mars progresses into your 6th house of hard work, perhaps gifting you with the ill and intent to recuperate through the early year's burdens.

Because the nature of this transit doesn't allow you much room for preparation, the focus here should be on saving, especially during Mars' fall, happening from the 25th of March to the 21st of May.

When related to money, Mars is more inclined toward spending, especially if you are born during the day and are 25, 37, 49 or 61. Because his fall is happening in the 5th house of pleasure, children and entertainment, you might want to pay extra attention to the necessity of spending money on those areas. Those of you who have children might not have that much choice regarding this transit, but if you are burning all your dollar bills on things that serve nothing but for entertainment, you could benefit from making some cuts. Mars is the planet of swords and cuts himself, so take advantage of those natural inclinations.

After this period, things promise to look brighter, but you can expect for the rest of the year to be focused primarily on getting yourself back on your feet. So proceed with care and make sure you're making an effort to save. Good luck, Pisces!