Overview of 2023 Astrological events that are vital for the fate of the Zodiac sign Pisces during the course of the Black Water Rabbit Year. 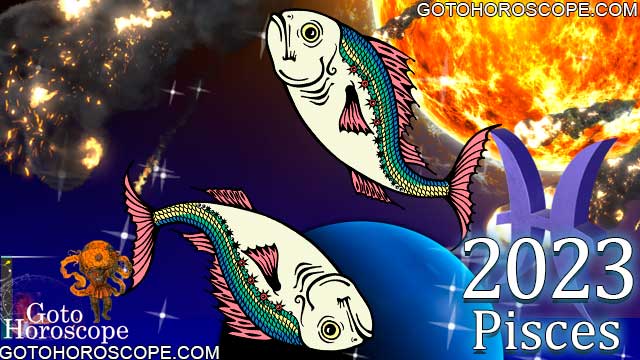 Well, the bad news is that the Jupiterian luck that was brought onto you last year is moving on to better things (the other signs deserve some Jupiter love too). With that, your task this year is to make things happen after such an upward trending year. This is not to say that there's a downfall coming, but this year you won't be able to rely on luck alone to succeed. It's time to take matters into your own hands.

A good way to start investigating what 2023 has in store for you is to take a look at how the year starts. Astrology places a lot of emphasis on beginnings, so it only makes sense for us to spend a bit more time with January before we move on to the bigger transits the year has in store for you.

January gets the world started on a left foot (no offence to the lefties out there). Pisces, is of course, not exempt from this. If anything, the difficulties of January are more prevalent to your sign rather than others. This is because we have the Mars retrograde that started late in 2022 happening in a mutable sign (Pisces is also a mutable sign). Mutability embodies themes of change, transition and multi-tasking, and with the planet of action going retrograde in a place like that, you can expect it to get a little hectic. But like I said, this is a transit that started in the previous year, and so January is simply the month for you to get back up and deal with whatever problem Mars has brought up.

The retrograde happened in your 4th house. This is the place of home, family and foundation. Some of you might've been caught up in the middle of a transition from one home to another, or perhaps your father was the one going through some of these martial issues. The good news is that Mars will be moving forward again on the 11th, so you can expect things to soften around that time. With that said, you want to take full advantage of the first few days when Mars starts to move forward (from the 11th to the 12th) to make the necessary moves to re-establish a solid foundation. For those of you who just changed homes, this might be a good time to kick out any unwanted roommates, make demands to your landlord, or even hire some contractors to fix any issues. This is especially true for the Pisces born at night. Those born during the day might want to wait a bit longer, however (after March 25th).

Speaking of March, there are quite a few big astrological events happening this month. Saturn, who's been transiting your 12th house for the last 3 years, is finally moving on to your 1st house. This happens on March 7th.

This transit comes with a lot of pros and cons. The Pisces born during the day get to reap a lot more of the benefits with this transit, which brings a greater degree of authority to how you present yourself, perhaps even helping you advance in your personal aspirations through hard work and responsibility. Though, for those of you who were born at night, Saturn can be a little trickier.

Since the 1st house deals with the body, Saturn can sometimes bring stiffness and sluggishness to people born at night in this house. This transit lasts for almost 3 years, so you might want to take your health a lot more seriously through the years to come. Saturn isn't necessarily always an omen of bad health, but it does ask for responsibility. Pisces, especially is known to be a bit more experimental with substances like alcohol and the like, so you might want to cut down on those considerably, especially if you use it to calm yourself down sometimes. Saturn can boost these calming effects to a detrimental degree, promoting a lot more idleness than you'd want. Now is the time to learn healthier coping mechanisms. You might want to pay a visit to a naturopath or a nutritionist to help you build a diet that has both calming and healing effects. That way, you can dampen the anxiety without making your job harder to do.

Pluto will also be changing signs on March 23rd. This change is a little less lasting, though. This is because the planet will retrograde back into your 11th house on June 11th. Yet, even though it won't last very long, this brief transit does foreshadow a much longer chapter in your life that officially starts in 2025 and lasts for 20 years. So, you'll want to pay attention to that.

Pluto in the 12th house is all about going into the depths of your psyche. This is the place of the unknown, meditation and solitude. So through this period, don't be surprised if you keep getting opportunities to spend more time alone and connect with the spiritual or even mental side of life. Still, if anyone spends a lot of time meditating or simply reflecting, you know things can get a little wild. So be prepared to get to know sides of yourself that you never knew even existed before.

This transit is rather welcome, considering the contrast from the 11th to the 12th house. The 11th is the place of friends and the community. Having the planet of depth transit through there for the last 20 years likely caused you to focus too much on how you can help your community or even society at large. Now, it's time for you to focus on how you can help yourself a bit more.

With that said, 2023 is quite a big year. Pisces—and all the other signs, for that matter— are going through the beginning of major changes. Unfortunately, this year has no room for impatience. All we have to do is do the work and wait for what the future has in store for us. Either way, you got this, Pisces. Good luck!