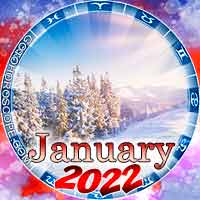 Or read general January 2022 Horoscope for a month ahead

As the year of 2021 begins to come to a close, make sure to be open to the changes that will come as 2022 starts to unfurl. As January begins the moon will move into Aries, the first sign of the astrological zodiac cycle. The moon in Aries is characterized by youthfulness, passion, and determination. With the difficulties that have arisen within the past couple of years, these Aries traits will be a moving force in shaping the rest of January 2022 and the months that follow. In particular, this will be impactful on personal mood, feelings, and emotions.

The Sun will fully sextile Neptune on January 10th, allowing for deeper awareness for the feelings and circumstances of those around you. You will be far more cognizant of the behavior of others and their sub-sequential wants and needs. This interaction between the Sun and Neptune shifts your focus from your personal demands to the bigger picture. Consequently, this is the ideal time to extend your talents to charitable causes and those in need. Further, use this day to gain a deeper understanding of your own spirituality.

During the second week of January, Mercury will enter into retrograde. While Mercury is in retrograde, there will be several changes and disruptions in your typical routine. Old methods will need to be reviewed and revised. It can be easy to become frustrated when project after project gets derailed, but it’s essential to acknowledge the importance of change. Use the change that Mercury in retrograde to inspire your own creativity and embrace your personal growth.

This growth will continue throughout January as the Moon moves into the opposition of Pluto on the 17th. This is a rather difficult transit to endure. Generally, Pluto moves into transits rather slowly. So when a transit does occur with Pluto, these effects are profound and deep. Thoughts, feelings, and emotions will be heavily intensified by this opposition. Emotions will not necessarily be harmonious, creating several emotional arguments. Intense encounters with loved ones are going to be plentifully abound. While it is easy to act impulsively and irrationally on your emotional instincts, be wary to act on them unless some sort of good can come of it. Subconscious thoughts will arise to the surface, clouding your judgement. Avoid jumping to any conclusions. This will only create more problems later on.

The season of Capricorn will come to an end as the season of Aquarius begins on January 19th. While Capricorn is characterized by a season full of ambition and dedication to success, Aquarius provides a lighter atmosphere. During the season of Aquarius, you will be able to slow down and relax after the arduous work of the Capricorn season. Everything will feel lighter and freer than ever before. This will also allow you to focus on self-care and embrace your true passions.

Towards the end of the month, communication will become increasingly difficult. On the 22nd, the Moon in Virgo will square Mars in Sagittarius. Mars, the ruling planet of passion and anger, will have a strong influence on emotional communication. Emotions will be running high, allowing for an opportunity for needless arguments and conflicts. It will be a bit difficult to handle people during this transit. It will be far too easy to take out your anger and stress out on others. While you mind satisfaction when lashing out, this rash decision will cause you much regret later on. Be extra wary of acting on any impulses you may have- your emotions will cloud your judgement during this time. Thankfully, this transit is a short one.

Despite the rough-goings in your social life earlier in the month, friendly communication will become more achievable as the Moon Sextiles Mercury around the 24th. This transit will ease any tension in your relationships, allowing for carefree conversation. These conversations won’t be incredibly deep or insightful, but this will be a welcome change. Regardless of the depth of the discussion, it will provide a much needed sense of community. Things have been so tense and serious lately, that even the smallest of light chatter will be a unifying experience.

As January finally comes to a close on the 31st, the Moon in Aquarius will square Uranus in Taurus. During this final transit, there will be an overwhelming sense of boredom. Regardless of what you have been doing lately, nothing will seem exciting. This may just be the winter blues, but you are craving some spice in your life. You will be willing to partake in riskier situations than you have done in the past. Whether this is a good or bad thing ultimately remains to be seen. It can be a liberating force or it may cause an onslaught of regret. This will inspire you to make changes in your life, but be aware that this feeling may be fleeting.