Overview of 2023 Astrological events that are vital for the fate of the Zodiac sign Capricorn during the course of the Black Water Rabbit Year. 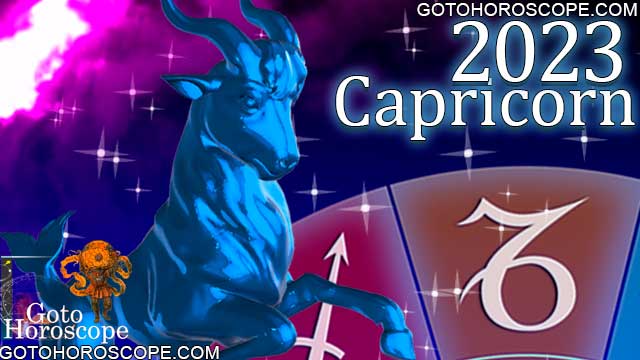 2023 is the year of change. Though it will be slow and gradual, this year is the first step toward a new direction. This one is significant for Capricorn since both the ruler of your sign (Saturn) and Pluto, who's been transiting through your sign for approximately the last 20 years, will be moving towards new places in your chart. So brace yourselves for some novelty incoming, and get ready for the unexpected.

Though these are the most important transits of the year, an excellent place to start is always the beginning. So let's take a look at what January has in store for us.

Although this year brings a lot of positive changes to the lives of every zodiac sign, the year's inception is more on the rocky side. Much of January will be spent clearing some of the unfinished business of the previous year. 2022 left us with the double retrograde of Mars and Mercury as a parting gift. This one is quite important for Capricorn's specifically since the Mercury retrograde happened in your own sign.

When we have such events happening in our sign, and therefore our first house, the significations of the transit become much more personal and internalized. This Mercury retrograde likely asked you to address your life direction and aspirations. Mercury is the planet of planning, studying and categorizing. This means that most of January will have a tinge of nostalgia as you look back at the past to address your past failures. This is especially true for the missteps that might've caused you to feel trapped or imprisoned in some way.

While that might be a rather uncomfortable transit to live through, this is an excellent opportunity for you to look at these misfortunes head-on and leave them behind as you go forward in the year. Like we said earlier, 2023 is the year of change, so don't be afraid to take leaps of faith and break free from anything that might be tying you down to an undesirable present. The good news is that this transit had already started at the end of 2022, so all there will be left to do in January is take action and make a change. This transit also fizzles out by the 18th of January, so be patient if things seem to not be moving in the right direction right away.

It's also important to note that despite Mars' change from retrograde to forward motion in the first month of the year, the planet will still be transiting through your 6th house of labour and routinely work until mid-March. This is important because the 6th house is usually the place that comes with these restrictive qualities, so make use of Mars' natural warrior-like qualities to break free from any chains that might be binding you.

March is also important for other reasons. Not only will Mars be leaving that particular difficult house, but Saturn, the ruler of your sign, will also be changing signs. This means that the planet of restrictions, boundaries, and maturity enters your 3rd house of communication and daily rituals.

Now, Saturn moves relatively slow, meaning that it will stay in this particular house for the next two and a half years, so you'll have plenty of time to get accustomed to these changes. The ringed planet almost always asks us to address matters of authority in our lives. With this transit happening in the house of communication, you can expect that studies will become a more powerful force in your life for a while. One of Saturn's primary methods of authority in the 3rd house is through the idea of expertise. Instead of learning something new, you can expect to dive deeper into a topic you might already be invested in. Since the third house is also related to religion, considering that traditionally this was called the "House of the Goddess," there's a perfect chance that whatever it is that you deeply investigate this year will somehow alter your cosmology in ways that make it more realistic and practical.

Like we mentioned earlier, Saturn is not the only planet moving on to a new sign this year. Pluto, who's been transiting through Capricorn for quite a while now, will also make a shift into your 2nd house of finances from the 23rd of March to the 11th of June. The reason this transit is shorter than you'd expect for a planet so slow is that Pluto will retrograde back into your 1st house in the second half of the year. Meaning that there's more soul-searching needed before the planet officially moves to your place of finances and self-worth in 2025. Still, while the planet stays in your 2nd house—even if briefly—you can expect money matters to become much more severe. Now, because the 2nd house is the place of self-worth just as much as it is the place of how you make money, a big question you'll have to answer is how much you want to make and what you want to own in the long-term future. To answer these questions, first, we have to have a solid idea of who we are and what sort of impact we want to leave in this world, though. This is probably a very good hint as to why Pluto will have to go back into your house of self.

2023 is a rather introspective year for Capricorn. You'll be asked all these more significant philosophical questions about where you want to take your life next, and those aren't always easy to answer. Still, if you look for the answers in the right places, you'll be sure to find all the support you need. Jupiter (the planet most astrologers see as the God of Triumph and Good-Luck) will be at your 4th house for most of the year. This is the place of family, so it might be a good idea to turn to your parents or chosen family when these questions become hard to address. Sometimes we need a third-person perspective to find clarity, so don't hesitate to ask for some assistance when you need it. Good luck, Capricorn.