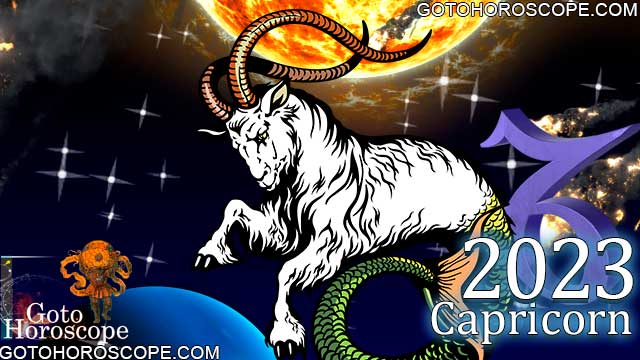 As the stereotype would have it, horoscopes for Capricorn would focus solely on a career. And while not every single Capricorn is a tireless workaholic, it's not too farfetched to say that a good chunk of you do have high goals and aspirations.

With that said, 2023 is here to get you to relax a little and get you to stop thinking only about what you'll do tomorrow and to get you living more in the present. This is because Venus, the ruler of your career, is going in her retrograde this year.

Contrasting Mercury, who goes retrograde at least three times a year, Venus only moves backward every other year, so you need to pay attention to those whenever they come around. This year the Venus retrograde is happening from the 22nd of July all the way to the 3rd of September. Still, the retrograde is not the only important part of this year since whenever planets go retrograde, they usually stay in the same house for almost double their regular stay. Now that you know that, this transit can be as long as five months, from early June to early October.

This whole ordeal is happening in your 8th house, of change, collaboration and other people's resources. With that said, you can expect these topics to be enmeshed with your career.

Now, when it comes to this idea of "other people's money," what we really mean is debt. Though this is not only limited to financial debt, more often than not, this simply embodies the sense of being indebted to somebody.

If we take a look at what happened last year, we can get a real good sense of why that could be.

For most of 2021 and 2022, Saturn has been transiting your 2nd house of finances, and since the 2nd house is opposite to the 8th, they're very much related. This can mean that you've had to be a bit more conservative with your spendings for the last two years. Some of you might've even lost a job. However, this year Saturn moves out of the 2nd house, allowing for a better cash flow. Additionally, this transition is made even better through the aid of Jupiter, which often symbolizes teachers, spiritualists and sometimes literal help from the heavens.

In which case, this sense of being indebted might come from the help of Jupiter, who'll be transiting through your house of good fortune for most of the year. So the real struggle with this transit might be overcoming your need to retributed a favour from someone who might've not even expected anything in return. Especially if you are just now recovering from a long period of scarcity. The task for the year won't be to work harder, but for you to learn how to accept help and know that money or hard work is not the only way to pay favours forward.

One other factor that might be worthy of your attention is that the 8th house is also related to the idea of idleness. And as much as you might jump to conclusions thinking that this year will still be exempt from activity, this can merely be a calling to not be so hard on yourself and take a break, even if that break is only a mental one.

2023 is a well-deserved reward for Capricorn's career. Things have been quite complicated for the last little while, so for once, it's good to have a bit of a leg up moving forward. Things might start a little slow, but this year is merely setting you up for further blessings to come. You, along with all the other cardinal signs, have been having quite a difficult time for a while, but in 2023 this is about to change. Just remember to take it lightly and get rid of your mountainous expectations for yourself. From now one there are no external enemies or adversaries. The primary place to find any adversity will be from within, so do what you need to do to prevent that from happening. You got this, Capricorn!