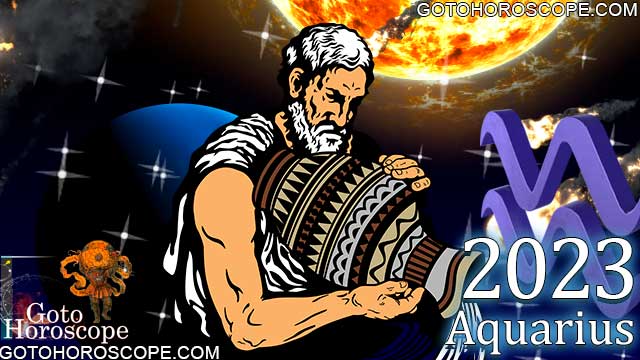 When it comes to Aquarius' career, 2022 might've been a bit of a rough year. With the eclipses mainly happening in your 10th house of career, there could've been a great deal of change in that sphere—many of which are far less than comfortable. Some of these difficulties got even more noticeable toward the end of the year when the planet responsible for your career, Mars, went on its retrograde cycle.

A lot of those vibes still spill over into the first half of 2023, especially the Mars retrograde cycle that lasts all the way to March of this year. This retrograde happened in your 5th house of creativity, children and entertainment, tying some of these topics with the topics of career and occupation. This might've pushed you to establish a more outstanding balance between hard work and entertainment. And for those who do happen to work in fields involving the topics mentioned above, some of the retrograde and eclipse shenanigans might've restructured entirely the way you approach your day-to-day work tasks.

Even after the retrograde cycle is over in March, due to Aquarius' chart's configuration, once Mars leaves your 5th house, it will enter your 6th house of hard work and exertion where he's also said to be fallen.

This can be a significant red flag that some rest needs to take place. Even if workplace hardship might be a little outside of your control, further engulfing yourself in it will only make it worse. Because Mars is tied to all of these events, taking some of the frustrations at the gym with a literal punching bag might be of great help to get you back in alignment.

With that said, 2023 does have its less than pleasing moments for Aquarius's career, but most of it is just the leftovers from that year. The big moment to look forward to is once all of this Mars and eclipse nonsense is over as early as the 20th of May.

Mark this day on your calendar because Mars goes from weak and struggling to have all sorts of supporting influences all of a sudden, ushering you toward a new fresh start. This is because as soon as Mars enters your 7th house, Jupiter, the planet of abundance, ease and expansion, will be overcoming Mars throughout all of his stay in that house. While this can still be a little complicated for joint projects, independent endeavours are sure to get a lot of traction. So for the rest of the year, it might be wise to focus solely on your personal goals and avoid doing anything that might need any additional support. Especially since shortly after that favourable Mars transit, we have a Venus retrograde happening in the same sign. It's time to take what you've learnt over those more challenging periods and put it to good use while building some independence.

From there onwards, things keep getting better with the nodes shifting houses in your chart as well. Like mentioned earlier, in 2022, you spent most of the year with the South Node in your 10th house of career. Since the South Node denotes this sense of surrender or sudden disappearances, most of the occupational struggles are probably at the nodes' fault. After the eclipses of May, however, that cycle will be long over, with the nodes completely changing signs in July. This will shift those energies into the topics of the 9th house, which deal with education and philosophy, which could involve the need to develop new foreign skills to triumph in this new chapter ahead.

Despite the bad news of the early year, 2023 is packed with opportunities. You'll need to think out of the box and be completely independent to succeed. But that's a skill that already comes naturally to most Aquarians out there, so you have little to worry. Don't be afraid to take massive leaps of faith, especially once July comes around. And every time you feel like the storm won't end, know that the rainbow is just around the corner. Good luck, Aquarius.