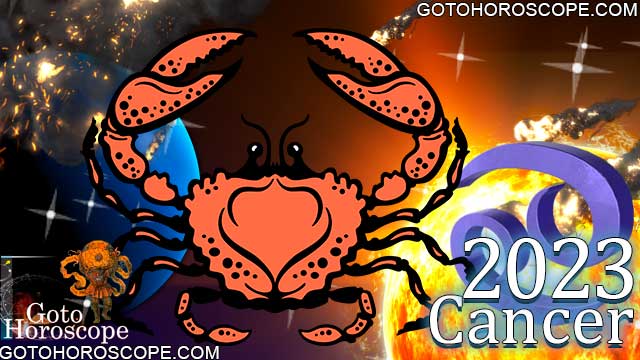 With the Mars retrograde that ended 2022, Cancer natives might've faced some struggles and high levels of psychological tension at the end of the year. Mars is the planet responsible for taking care of Cancer's career, and when things go backwards with Mars, the same is reflected in the tangible world.

The bad news is that, though the retrograde started back at the end of the year, some of it still spills over into the New Year, making overcoming the tensions mentioned earlier a primary focus.

One thing that's also worth noting is that whenever planets go retrograde, it means that they'll stay in one particular house of your chart for an abnormally long time. Mars, for example, remains in a house for about a month and a half, but once it goes retrograde, it can stay there for up to 6 months.

Thankfully a good chunk of those months is left behind in 2022, but since Mars won't be leaving your 12th house until the 25th of March, it might be helpful getting used to what this house means and how to work with it constructively.

The main thing to focus on here is the fact that you'll have to embrace doing some work alone or with little help or supervision. For unemployed, this can be a rather difficult time as it might seem like no place is hiring. This can mean that the Universe might want you to start your own thing or find alternate ways to make money until the water clears out. Sometimes, being in this survival mode can be rather beneficial to push ourselves past what we thought were our limits. So if you're tired of waiting around for the allegorical knight in shining armour to come to offer you a job, you can very well take on that role for yourself.

For those who are employed, this can still be a time of anxieties surrounding your work. Sometimes a transit like this can manifest as a fear of losing one's job or even suspicions that someone might be out there plotting to take over your position. Whether our reasons to think so is valid or not, the more we dwell in these thoughts, the more complicated the situation is likely to get. Whenever the 12th house is involved in an astrological transit, we might be inclined to look for an enemy when that villain might really be within.

After the retrograde ends, there might still be a few bumps in the road since Mars will take quite a long time to recuperate from it, and as soon as it does, it enters your 1st house of self and stays there until the 21st of May.

This is a transit to pay attention to, especially if you were born during the day. Since it can make us so defensive of our position at work that we might jump to drastic measures to prevent the worst from happening out of impulse. At times like these, I remember the Greek myths of individuals trying to change a prophesy, only to actually cause the predicted outcome.

With that in mind, up until the 21st of May, you might want to constantly second guess any actions that might have a tinge of Mars in quality (accusations, cutting people off, arguing, displays of power). I can't stress this enough: Things will be a lot easier than they might seem. Don't let your animalistic instincts speak louder than your rational mind.

The 21st of May also hosts the ingress of Jupiter into your 11th house of the community and allies. So if you can wait until then to play the role of Mars, you're likely to have your suspicions proved wrong, with the Greater Benefic Jupiter proving that your community is on your side.

2023, especially in the first half, might be a year full of suspicions and uncertainty regarding cancer's career. The big challenge will be here, silencing your ever-racing mind and grounding yourself in reality. To counteract it, doing active meditation can be really helpful, like strong yoga, fire breath or even just running.

Let the bad vibes out, and trust the process, Cancer. The Universe's got your back.