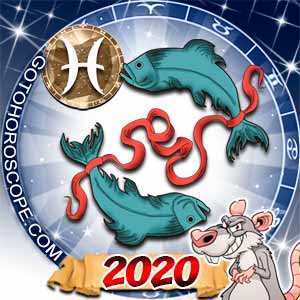 Astrology forecast for 2020, the year of the White Metal Rat. 2020 Horoscope for people born under the Pisces Zodiac sign.

Do you know how at the end of a long-running television show the networks make that series finale into a huge event? Think of the end of "Friends" or "Lost" how those episodes became a destination for everyone in the country. Don't worry: we're not suggesting that the sitcom (or romcom, or drama) of your life is going to come to an end. But we are saying that 2020 is the final season of one stage of your life before the much more powerful and successful spinoff begins. Think "Breaking Bad" and "Better Call Saul": one great show ended so a new one could begin. Pisces, you are about to begin an amazing journey that will have some of the characters from your previous show in a brand new setting. It will be all the beloved ones that are fan favorites but the secondary ones that never quite gelled had contract disputes, so they'll be looking for cop dramas on other networks. The show that is your life is going to be some of the finest entertainment ever. Your ratings for 2020 are going to go through the roof.

What ushers in this fascinating, exhilarating, and yet scary change of events? There's a particular cosmic visitor who is helping to set all this in motion for you. That's right, it's the presence of Saturn in your skies. It's no coincidence that the planet named after the god of continual renewal is making a strong presence in your life this coming year. But renewal doesn't necessarily mean вЂdo the same thing again'. This is where our television metaphor breaks down: the network isn't bringing back your original show as it stands for another season. Renewal, in this case, means letting the old and unhealthy die off so that new growth can occur. Does that sound like a gardening metaphor would work here? Yes, yes it does. Well, that makes sense, because you, dear Pisces, are looking to blossom. And the only way a tree can blossom is if it has room to grow without being choked by weeds and parasites. Sounds great, right? But don't get lazy. You've got some weeding to do before you can grow.

If there's one area more than any other where you will thrive, Pisces, it's in your career. This is the time for tremendous growth in your job, or in a job that you might not have yet. Think about that last possibility. Can you honestly say that you see a promising future in your current position? This may take a little bit of digging. It's easy to feel вЂcomfortable'. Lots of people feel comfortable in jobs that they don't actively enjoy, or that aren't enhancing their lives. You might find that advancement in this current position is what you want, and that's totally fine. Just be honest with yourself. But if it's time to get out, then get out. One thing to watch for this year, Pisces, and that's the second quarter. From April through the end of June, you have Jupiter and Saturn combining just for you. Think about that: that's the power of the two largest planets in our solar system in perfect sync. That is the astrological equivalent of an atomic bomb and it's at your disposal. And atomic bombs are always good things, right? You guessed what we're going to say next: use it wisely. You could either have all the power in the world at your disposal for good, or you can lay waste to everything. What does this mean on the job front? It's simple: don't burn your bridges. You can changes positions, leave an employer, completely switch careers, but when you do: make nice, send follow up thank yous, and get all of your current work wrapped up. Don't blow things up. You are powerful, but you need to harness that power.

Wouldn't it be nice if you didn't need that job in the first place? Yeah, we'd all like that. Oh to just have an endless supply of cash that flows into the house as if from a garden hose. Pisces, we wish we could tell you that you'll have that: a magical supply of money dropped into your mailbox every month while you sit on the couch watching Netflix. Alas, that is not the case (and you wouldn't believe is if we said it was). Money is going to be something you'll need to keep watch on this year, more so than in other years. That presence of Saturn we keep talking about? Well, it's a big and powerful planet, but it giveth and it taketh away depending on your actions. You have a lot of changes coming on many different fronts this year, so you need to make sure your financial house is in order. Get your bills paid on time. Pay off that high-interest credit card. And if you have the means to do so, put a little bit of money away for that rainy day. Keep doing this throughout the whole year, because Saturn has a little extra pull the second half of the year from its friend Jupiter. The second half of 2020 will have what we call a negative Jupiter. Think of it as being like the matter and anti-matter engines from вЂStar Trek': incredibly powerful and helping you travel great distances to go on amazing adventures, but also always on the verge of exploding if not for a helpful Scottish engineer. Your money could go south very fast if you're not careful. Put some cash away, pay your bills, and even though your impulsive streak says to buy that boat, hold off until you're absolutely sure you can afford it.

Whatever your current romantic situation, there is one big force that every Pisces needs to be prepared for. Let's just call it вЂbirth'. Don't panic if you're a happily single person enjoying your free time and money. Birth, in this case, doesn't have to mean there's a child on the way (although it definitely can). It does mean that there will be a force outside of yourself that you are in some way responsible for and that you need to nurture. This could be helping to care for someone else, or a connection with a charity, or simply helping out a friend. If it is within a romantic relationship, this is the time where you're going to want to be there for your partner. This isn't out of obligation, though. It's from a sense of satisfaction that comes from being there for others. It's nurturing. Don't ignore this, Pisces. It may not sound like a wild and sexy time, but it's what you want this year and it's the first thing you'll think of from the word вЂlove'. Just remember: romance can have a strong nurturing component. This side of you may appear where you least expect it.

All this talk about a big change coming your way sounds perfect, right? All you have to do is clear some weeds and the universe is your cosmic oyster. Whatever you do is golden, right? Well slow down there our impish little fish. Yes, you have great opportunities ahead of you. But you need to act thoughtfully for them to come to fruition. You have a big impetuous streak, Pisces, and that's part of what makes you wonderful. It can also really screw up some great opportunities that you have sitting in front of you. So absolutely: be ready for change. Grab those amazing moments when they show themselves, but also think before you leap. We don't mean do a detailed analysis trying to figure out every possible way something will go wrong as you mire yourself in worst-case scenarios (one of your favorite places to be, we know). What we mean is just take a moment to make sure you clearly understand if this is something you want or if it will bring you joy. Don't just embrace change for the sake of change. You've done this before and it just results in sideways movement. Not this time, Pisces.

You are the risk-taker. When other people around you are staying the course and keeping their heads down, you have been the one to take the untrod path. Earlier in life, this made you feel different, but now you have to accept that's just who you are. Dear Pisces, this is your strength to get you through 2020. Risk takers are also explorers and discoverers. They're the ones who advance society for the rest of us so that we grow as a species. But not every explorer did great things or came back alive. Don't be reckless and thoughtless, but don't be afraid to be who you are, either. You have Jupiter and Saturn - the twin cosmic giants - at your back and supporting your every move. Take the power of the planets with you and make the finale of your current show strong and moving. Then after a relaxing weekend, come back to the studio and start filming that spinoff.