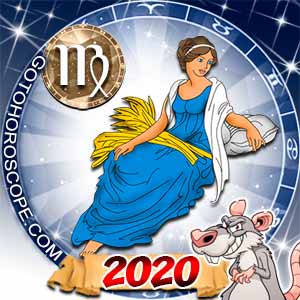 Astrology forecast for 2020, the year of the White Metal Rat. 2020 Horoscope for people born under the Virgo Zodiac sign.

Too many people in this world mistake quiet and politeness in people for weakness. That's a crying shame. Do you know who else is quiet and polite? Ninjas. Also Jedi Knights. Also any martial arts badass. Those are some pretty good role models, none of whom anyone would refer to as weak. We are hoping, Virgo, that you aren't seen as weak in other people's eyes, but we're guessing there have been moments when less enlightened individuals have thought this and maybe have even said it to your face. We both know that this isn't the case, and if you don't know it clearly, I'm going to let you know. You are a warrior. You are quiet and placid on the outside, but deep within there's a fierce tiger that can strike at any moment. And 2020 is when that tiger needs to strike. Read on, our young Padawan.

There's an interesting convergence for you to pay attention to in 2020. Mercury is moving in for a little bit with Pisces from February to April 14th. Don't worry, it's not anything scandalous. Mercury isn't even having its mail forwarded to the new address. It is a big transition in the sky, though. It's sort of the celestial equivalent of a low harvest moon here on Earth. What does this mean for you, Virgo? It's going to be the prime time for that tiger inside of you to strike. Think of January as your crouching month: head down, pupils huge, and tail wagging aggressively back and forth. February to April is when you pounce, and the rest of the year is for enjoying your prey, reaping the benefits of your hunt.

If ever there was a perfect metaphor for the workplace, it's the jungle. Even in the least cutthroat environments, everyone is angling for something and ready to pounce on a weaker member. We're not saying you need to become a bully. Remember: a tiger hunts for survival and to protect its young, not for sport. You need to sit on your rock and watch the other animals fight for a bit, then see where you need to be. Remember that convergence we mentioned? Look to that time (February to April) to act in whatever form that takes. Maybe it's time to talk to your boss about something you want to pursue, like a new project or a raise. It might also be time to confront someone that you've been meaning to for a while. We're going to temper the tiger metaphor a little (but just a little) here. We're not saying you're going to have claws out, ready to attack. But if there was ever a time you needed just a little extra confidence in order to face someone, this is that time and we want you to remember the tiger inside of you. Concentrate your big, heavy actions during those two months. You won't be inactive during the rest of the year, but we'll want you to ride the wave of after effects from that time. Maybe you'll be promoted, maybe you'll move departments, maybe you'll just quit your job completely and pursue something you've always wanted to do. Act, and then recover and respond to those actions.

We are going to assume that being calm and steady has carried over into all aspects of your life, whether you see it that way or not. Do you know one real-world arena where this is incredibly beneficial? Your money. If there's any area in your life where you need to be the slow and steady tortoise (we're moving away from the tiger metaphor for this one), it's with your finances. Calm, cool, and collected are exactly what you want to be when it comes to money decisions in 2020, Virgo. This is not the year for throwing your life savings onto the hot tip you heard from your nephew. If you don't understand what something is or how it makes money, don't invest in it. Keep your cool, keep dropping your pennies into your savings and your retirement funds and you'll be doing yourself a favor. Even if a fantastic financial opportunity presents itself (especially towards the end of the year), keep a skeptical eye open at it and research heavily. We think you'll find that you want to keep your dollars closer to you.

That period of springing from your perch to catch prey is going to keep you very active. A tiger conserves energy so they can release it in a quick burst. We humans don't physically work like that, or at least not with the strength of a tiger. But we've got the strength of a person and that's pretty damn good. 2020 is a good year to conserve your energy, healthwise. We don't mean sit on the couch all day, Virgo. You're not getting off that easily. We do mean that it's important to remember that part of the exercise is recovery. If you're already active, you know this, and we encourage you to not drop it. Give yourself that break. If you're not very active, we're going to give you a freebie that we want you to take seriously: stop beating yourself up. If you find yourself every night saying to yourself "Ugh, I really should get up and run", stop. Take the night off - one night - from the self-abuse. Yes, we all should be more active, but this year is about action and recovery. You're engaging in the non-productive action of "I should". For the last half of 2020, we want you to recover from that. Take care of yourself, of course: eat right, get a bit of activity in, but don't make unreasonable demands of your health, physical or otherwise.

Has being the calm, quiet warrior made it hard for you to find love? We're guessing that sometimes that's the case. People will mistake that for underconfidence or outright disinterest, which is a shame because they're missing out on everything you have to offer. No matter where you are in the romantic department (looking for love, married, wanting kids, having kids, etc), you have another celestial event that casts its glow across you all year long. You may have heard about the synchronicity of Jupiter and Saturn this year. It's going to have some sort of effect on every sign and you, Virgo, are no exception. You don't have to change who you are to find what you want in love and relationships this year one iota. You've got the power of the two biggest planets in the solar system at your back to support you and be your cheering section. Stay as quiet, calm, and placid as you care to, Virgo. You're not going to have to advertise your needs or wants to anyone. Why? Leave that to Jupiter and Saturn, the two biggest cheerleaders around. If it helps, think of them as your wingmen. They're standing behind you singing your praises or supporting your argument while you just quietly be you. We're not saying they'll get you everything you'll want in 2020, but always remember they have your back so that you thrive.

Everything is going to hinge on that magical time from February to April 14th. Notice how that period of time ends on a specific date? Isn't that interesting? It's not a date for buying a lottery ticket or anything like that, but if ever there's a date where you should take stock of where your life is and where you want it to go, that's the one. In fact, do this: make a plan to sit in a coffee shop on the morning of April 14th (or afternoon if you're at work) and sit and watch everyone there. You're going to see what's going on around you and ask yourself: what do I need next? This is the beginning of your recovery period and you need to come up with a plan, or at least the beginnings of one. Even if you look around and don't like what you see, you can at least avoid what you don't want your life to be. Take a notebook and jot down some thoughts. You don't have to spell everything out but start the process.

You are the quiet warrior, Virgo. Ready to pull out of a sword or lightsaber at any moment and defend your charge. This is the year you model yourself after the tiger and remember the tiger's modus operandi: watch, attack, recover. And during that recovery period, you're going to do a lot of things. You'll feast on the prey you've killed. You'll reap the benefits of taking what's rightfully yours. And you'll notice how strong and powerful you actually are and not care about other people's opinions of you, because they don't get the full picture. You are powerful, Virgo, and you don't feel a need to broadcast it. That's an admirable trait and there's no reason for that to change. What you do need to do, though, is make sure you remember that and use your power for good.