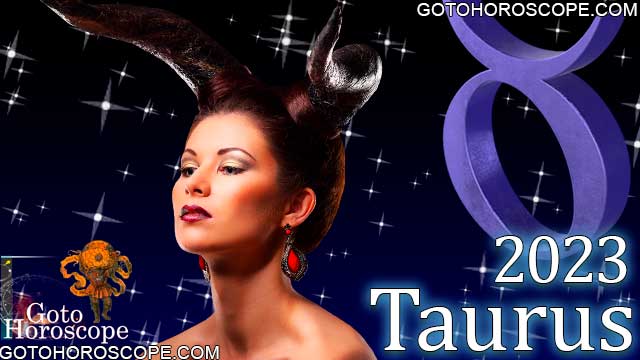 Even though this might sound like your astrologer is playing favourites, the fact that Taurus is one of the signs that loves most passionately and with the most intent is unquestionable. As a sign ruled by Venus, the Goddess of Love herself, romance plays a big role in your life, as you seek to find that one true love.

In 2022 Taurus might've had a rough time with romantic matters, though. Especially since the year ended on a Mars retrograde, things are likely to have been somewhat challenging (or even entirely depressing). This is mostly because —as much as you're a Venus-ruled sign— your 7th house of marriage and partnership has Mars as its primary planetary manager.

The bad news is that some of this retrograde spills into January of this year. Even if the retrograde only lasts for a couple weeks after the year's inception, Mars will continue to stay on its retrograde sign all the way into March.

Because this Mars retrograde happened in your 2nd house of finances, most of your romantic issues might've been money-related. There's a wide range of how this transit could've manifested. Still, it can be anything from not having enough money to go on dates to something more serious, such as financial troubles causing instability in the marriage.

With that in mind, know that the first quarter of the year will be spent mostly figuring those troubles out before you get to move on to the next stage. While this might not be true for all Taurus natives out there, if you were born during the day and are 18, 30, 42 or 54, this one will certainly hit home. The best thing to do about it is to use your natural patience to navigate these rough times slowly but steadily.

On the other hand, the year starts to get considerably better for romantic matters at around May. During this month, Mars will be getting a lot of help from both benefic planets (Venus and Jupiter). Since these are the planets of love and abundance, that might be a good time for going on dates and livening up ongoing relationships. The 25th of May is a day to mark down on your calendar for that reason.

Venus might be another planet you want to pay attention to this year when it comes to romance. While this is likely to be more relevant for those who are already in serious relationships, the semi-annual Venus retrograde is happening this year. This one is more important for the Taurus who are already coupled because this is happening in your 4th house of home and family. While this is a rather benefic retrograde, like yielding many positive results for those of you who apply, it still might be time to renew your family structure. This is likely when you'll need to compare and contrast your needs against your partner's needs. Some of you might even need to spend some time apart to reflect, but given that Jupiter will be in your 1st house of self during this time, all this reflection is likely to instigate powerful insights. If anything, this transit is likely here to show you that a healthy relationship requires that both parties have time to be independent momentarily. The retrograde starts on the 22nd of July and ends on the 3rd of September, although Jupiter comes in to gift you with great wisdom to resolve any possible issues on the 21st of August.

It's also important to note that Venus will be in your 4th house for quite a long time with the retrograde. This is great for bringing the family closer together, even if that happens through individuation.

2023 seems like it comes packed with some romantic work for the Taurus out there. It's perhaps the best year for the single Taurians to gain better insight into what they want out of a relationship. And those who have been in longstanding marriages and partnerships also benefit from addressing issues that could hinder love from reaching its true potential. Don't wait around. It's time for some soul searching, Taurus.