Overview of 2023 Astrological events that are vital for the fate of the Zodiac sign Taurus during the course of the Black Water Rabbit Year. 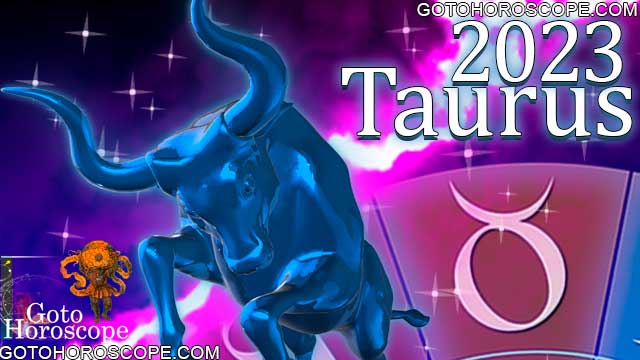 In 2023 the planets are making big moves, and we are to believe the old saying "as above, so below" we're reasonable to expect that our lives will also reflect much of that change in pace. Taurus actually gets to benefit from some of that change. This is mainly because the main area affected in your chart is the area of friends and associates. I say this is likely to come to your benefit because this change of pace is not toward speed but the calming down of certain areas of your life. More often than not, Taurus gets famed for being the slowest (but also most steady) of all signs in the zodiac, so having your friends and community meeting you at a slower pace might be a lot easier for you to keep up with. This is not to say that you weren't managing it before, but sometimes a little bit of steadiness is welcome.

Now, before we explore who's to blame for this slowing down a bit further. First, it's essential to look at how the year starts since, in many ways, January sets the mood for how the rest of the year will unfold.

The theme of January is house cleaning. Because 2022 ended on a somewhat awkward note with the double retrograde of Mars and Mercury, some of those energies will still spill into the year ahead, and it's our job to work with it to ensure it doesn't snowball into something greater than we carry with ourselves through the course of the year.

These retrogrades will be targetting your 9th and 2nd house: Study and Livelihood.

This transit can be pretty rough for students, especially those who had to spend a good amount of money to pursue higher education. The Mars retrograde in the 9th house can push you to be ever so hungry for more information, taking more courses or even going on a trip abroad to learn something new. The Mercury retrograde in the 2nd, on the other hand, doesn't help much, making it somewhat difficult for us to have the organizing skills necessary to stick to a budget.

Because these transits started in December, January merely brings the consequences of some miscalculated actions regarding the areas mentioned above. So, the best way to clear this out quickly is to be wiser with how you're spending your money. Even if it seems like a good investment, it might not be the right time to do so, and the best option is likely to save rather than spend. The good news is that the retrogrades end relatively early in the month, with both planets moving forward again by the 18th of January.

However, Mars still has a lot of work to do in your 2nd house, and it won't leave the place until later in March, so you might want to try your best to be a little frugal during this time. This is especially true if you are a Taurus born during the day.

With March leaving your 2nd house in March, another planet makes a big move that same month: Saturn, who enters your 11th place of community, friendships and alliances.

This is the most important transit of the year because it initiates a two and a half year long chapter in your life. This is also the primary culprit of the changes we mentioned in the very first paragraphs of this horoscope.

Saturn is a cold and dry planet. It tends to slow and isolate the areas of our life in which it transits. Now, like we said before, this can actually be a positive thing for the Taurus out there. Especially for those of you who were born during the day, this transit can harness a greater degree of maturity in your inner circle. Saturn doesn't just slow things down. It ensures that things have time to develop. And while this transit might not be the best for great parties and adventures, it's likely to bring you situations and connections that will make your plans for the future feel a lot more tangible. This transit might bring people who have the Saturnian stern touch that you might need to achieve a more realistic perspective of your aspirations.

Speaking of the future, Saturn is not the only slow planet changing sign. Pluto, the Lord of the Underworld, will also be entering your 10th house of career and reputation for a couple of months before it retrogrades back into Taurus' 9th house.

This transit is linked to the future because Pluto usually stays in a particular house for 20 years on average—he plays the big long-term game. Then, this brief transit is supposed to foreshadow something much bigger coming in 2025 when Pluto commits to its 20-year long chapter in your career house.

Because the 10th house is so tied to your activity and how it's received by the world at large, one thing to expect is for an intensification of career matters. You may begin to see the seedlings of big projects that could bring you great prosperity in the long-term future. You want to take these advancements—as tiny as they might initially seem— very seriously. Pluto might be the most petite astrological body we're working with, but it comes bearing the lesson that you shouldn't judge a book by its cover. This year you'll only get to see the "cover page" of this big book you're about to write as far as your career is concerned. Make sure you're not jumping to conclusions too quickly, then. Given that this is a 20-year extended matter, there will be plenty of time for ideas to simmer and transform. Take these first steps with forethought, but don't commit to a particular outcome either.

2023 is the year for Taurus to make big moves. So don't hold back. Keep it slow and steady, and you're sure to win the race.