Marriage Compatibility Quote: Lord of the Flies, for two.

Airy Gemini is like a gentle breeze or a tornado, depending on how revved up that breeze gets. Watery Cancer Moon is like a waterfall. It starts off as a gentle, nourishing rainfall but can turn into an all-out hurricane. It is sensitive and very protective of its heart. Gemini Moon needs to be in the know to feel secure, even the things Cancer Moon would prefer not to address. Air pushes water around and dries it up, while water makes air heavy and cold.

Growing Old Together Compatibility Quote: Q: Will you shut up already? A: You first!

If they make it to the altar, it will be a miracle. They could have one of the most drama-filled divorces ever.

Now, here's the thing: Cancer Moon brings a gun to a knife fight. If it even gets a whiff of possible aggression or disapproval of themselves or their family, they come back twice as hard. It doesn't even occur to them that they're hurting other people, perhaps needlessly; they think it's justified as self-defense. The good news is that Gemini Moon doesn't take actions seriously, so a lot of what Cancer Moon does rolls off its back. But it never forgets words. Tell a Gemini Moon you hate them, and they take it at face value. When angry at someone, Cancer Moon needs to make the other person hurt just as much, if not more. It takes a lot to drive Gemini Moon over the edge of that waterfall, but when it does, it disappears into the air and flies away.

Sex Life Compatibility Quote: Tell it to the marriage counselor.

Gemini Moon and Cancer Moon are fundamentally mismatched when it comes to sex. Cancer Moon has sex to reinforce the love bond. Gemini Moon largely has sex for fun and to do something with someone else. Gemini Moon is willing to try anything and gets bored doing the same thing. Cancer Moon is threatened by having to change up anything that's working for them. No, it won't get on top. No, it won't put that in its mouth.

Gemini Moon is more flexible and more likely to give Cancer Moon what it wants. It's good with its hands, so it knows how to touch Cancer Moon. It just doesn't want to linger in bed listening to the rain and falling asleep while cuddling. It would rather get up and do something else, like eat, or watch television, or get on the computer. And why not? Sex time is over for Gemini Moon. The problem is that everything before and after sex is still sex to Cancer Moon, who feels unappreciated and unattractive when left in bed while Gemini Moon goes on Facebook.

Cancer Gemini How to Make it Work Compatibility Horoscope

Make it Work Compatibility Quote: Feelings are important, but not everything.

If Gemini Moon can think about how Cancer Moon feels when it just wants to relax at home in the quiet of the night, and if Cancer Moon can understand that Gemini Moon needs a lot of activity, they can compromise, or at least, give each other space to do their own thing while the other gets what they want. 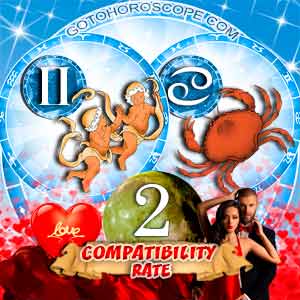 Sun sign compatibility will get you so far. Sure, you get along well, but will they allow you any peace and quiet?

If you want to know if you can live with Gemini Moon's constant communication, you must know if your Moon sign is compatible with this Moon sign.

To determine if your Moon is in Gemini or Cancer, put your birth date and birth time in our Natal Chart Calculator and do the same for your partner.