Gemini and Sagittarius, which sit on opposite sides of the zodiac, are the overgrown children of the stars. They don't grow up. They don't get tired, and they don't stop wondering. They may go about things very differently, though. Air Gemini Moon is like a gentle breeze or a tornado, picking up everything in its path. Fiery Sagittarius Moon is like a wildfire. Together you get something truly powerful, possibly destructive, but definitely exciting.

These two can talk up a storm, and they never run out of ideas. They have a million plans and a million things on their to-do list, including getting married someday. The problem is that on their own, they're not so good at doing the things that make those plans possible. World travel relies on money, and becoming a famous writer means actually sitting down and writing every single day and hustling to get that work published. When it comes to marriage, they have a million ideas of what they want the wedding and the marriage to be like, but neither really feels the need to make the moves to make them happen.

It's likely that if these two get married, it's a snap decision to go to City Hall and tell everyone afterward. From there, they contend with the hard parts, like actually sharing a life together, so they may not bother with most of the things couples think they have to do. It's more likely they see each other as an adventurer and a trusty sidekick, ready to take go where no man has gone before. This satisfied Sagittarius Moon's need for adventurer and Gemini Moon's need to learn. Except most people want to be in agreement on how to spend money, how raise kids, or what they're long-term plan is before making a big decision, because life happens no matter what you plan.

Sagittarius Moon is a wanderer with a wandering eye. They need to move around, explore, and keep their options open. Gemini Moon needs to be in the know. Neither Moon is particularly good at keeping secrets, and neither is particular good at being deceptive. In this sense, they're always honest with each other because they have no choice.

The trouble is that neither one of them are good at starting things. The house is a mess, they both can't stay in the same job, and they both like to move apartments. One wants the other to be the rock upon which the relationship stands, but neither is well-suited to it. If one of them tries to be the rock, they will resent the job. After all, why should the other get to have all the fun why they do all the work? Gemini Moon is most likely of the two to be stuck with the responsibilities.

And this is how it could end. The one stuck being the grown-up becomes resentful and rebels. They decide that it is their turn to fool around and be blissfully unaware of finances, of the mortgage, of who to send Christmas cards. The other is blindsided, and possibly left alone to hurry up and become an adult. If this doesn't cause them to break up, it will cause serious disruptions in every facet of their lives. Sagittarius Moon has an easier time starting over again than Gemini Moon.

Put two people together who don't take seriously and you get one of the weirdest couples in bed you can imagine. Sagittarius Moon has sex for fun and adventure, while Gemini Moon has sex to do something with someone else and satisfy curiosity. Together, they don't place a lot of weight on sex, even if they do have a lot of it. It feels good, but it is only part of the relationship, not the foundation. Gemini Moon knows how to keep things interesting, and Sagittarius Moon knows how to keep things hot.

They probably have a lot of sex in the beginning, without a lot of pretense or foreplay. And they probably have sex spontaneously. If given the choice to do the dishes or have sex, those dishes will rot in the sink for months. The good news is that even when they slow down with time, they still enjoy a more basic approach to sex when they do have it. Neither one is particularly jealous, so they let the other flirt with other people, even go out alone.

To that extent, they may open to swinging, at least to try it out. Variety is the spice of life, and if they both agree, going to a key party or finding another couple that is willing to swap may be the thing for them. Whereas introducing other people can often mean the end of a relationship, for them, this is just a new chapter in a very interesting book of life. They will maintain their love relationship, but they need not have exclusive sex.

Sagittarius Gemini How to Make it Work Compatibility Horoscope

Make it Work Compatibility Quote: Take turns being the grown up in the relationship.

They have to learn to share the responsibilities of life. They're very good at sharing information with each other, but they're not so good at doing the boring stuff or getting it done on time. They have to hold each other accountable for what they don't do and not simply let it go. Yes, it is a big problem if the rent is continuously late, or if no one buys groceries. It is a big deal if one or them goes to college but keeps switching their major so they never graduate, while the other is working to pay the bills.

They can share dreams very easily, and they can change dreams and directions if circumstances call for them. The main problem with that's that sometimes, you just have to take things on the chin and soldier on.

And this is the same for romance. One argument and they could throw it all away. One little mistake doesn't mean hitting the reset button, and Sagittarius Moon loves hitting that reset button. Losing your job doesn't mean you have to move across the county, especially if everything is going well otherwise. Gemini Moon, on the other hand, has no problem following Sagittarius Moon to the ends of the earth in youth. However, if it doesn't want to regret missed opportunities in old age, it is better to coax Sagittarius Moon to face the music and retry, rather than restart. 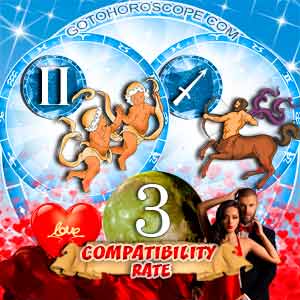 Sun sign compatibility will get you so far. Sure, you get along well, but are they willing to explore with you? If you want to know if you can work with Gemini Moon's incessant curiosity, you must know if your Moon sign is compatible with this Moon sign. To determine if your Moon is in Gemini or Sagittarius, put your birth date and birth time in our Natal Chart Calculator and do the same for your partner.