They are a good working team, but there is also something deeper. They egg each other on. They make each other want to be bigger and better than they are now. They have a little something the other lacks. Sagittarius Moon has the easy-going ways that rigid Aquarius Moon wishes to have, and Aquarius Moon has the inventiveness that Sagittarius Moon wishes it had. This relationship may not start as romantic, but it becomes romantic in its own weird way, and as these two genuinely feel that they are a great team and best friends, the desire to make it sexual may follow. Then, after many years of being together, they may even decide to make it official, in their own weird way. These two may never legally marry, even if they have a celebration to honor their relationship. If they do marry, it will be interesting. Sagittarius Moon likes to borrow from many different cultures, while Aquarius Moon simply likes to make brand new things. The wedding would be like It's a Small Word in another galaxy.

Growing Old Together Compatibility Quote: Time is relative, you know.

Time is relative, and for Aquarius Moon and Sagittarius Moon, time moves slowly. Or it moves backward, or it accelerates forward. Or it comes to a standstill. Neither of these Moons experience time on a gut level the way most people do. Sagittarius Moon tends to abhor the idea of getting old and the passage of time, and Aquarius Moon doesn't get a sense of aging or of moving closer to death. So, these two don't plan their lives according to any sense of mortality. They're in no need to get it all done before they die, so they actually end up accomplishing a lot. They both hate following the crowd or following any sort of leader. They do their own thing. They may never settle down and buy a house, or have children, or plan for retirement. They may never spend their life chasing the dollar and waiting to enjoy life when they're old. This doesn't make sense to them. Life is an adventure and an endless journey of discovery.

It is entirely possible that one would keep going and even love again if the other dies. They wouldn't want it any other way. Why should one die just because the other did? In the mean time, they don't worry about milestones, but they also don't worry about being a couple. It just happens. And they may not always be together, and they may not always be monogamous. And they may spend extensive amounts of time away from each other on separate adventures, and they wouldn't have it any other way. To them, love is letting the other be free to come and go and still have a pair of arms ready for them when they come around.

Sex Life Compatibility Quote: Is it the era of free love again?

Sagittarius Moon likes sex because it likes orgasms and sex is a friendly thing. Aquarius Moon likes sex because it likes pushing boundaries of taboos. It's a nice break from the day. Neither Moon takes sex so seriously that they have to have it a certain way, or that they even really have to have it with each other. However, a Sagittarius Moon genuinely in love would like monogamy. Generally speaking though, Aquarius Moon doesn't need monogamy as a sign of love and may not want it. There's a chance that other people will be involved in their sex life in some fashion. This is the kind of couple who are quirky college professors by day and members of a middle-aged swing club by night.

Sagittarius Moon will do it anywhere when the mood strikes, and it needs no foreplay or cuddling. Aquarius Moon will try anything. This can get interesting, like involving a possible arrest and trial interesting. If these two can avoid getting caught doing God-knows-what God-knows-where, then they'll be fine. Now, one thing to understand is that this couple may not be overtly kinky. Sagittarius Moon doesn't like the fuss of toys or equipment or costumes, and Aquarius Moon doesn't want to be a part of a subculture that any sort of rigid rules. Thus, they make up their own entire sexual world, where Aquarius Moon makes up rigid rules of it's own and Sagittarius Moon doesn't like to follow anyone's rules unless its come to the conclusion that it would have made those rules, too. As odd as this sounds, this works for them in the bedroom. They create and recreate their boundaries, likes, dislikes, preferences, and kinks in flux without whatever new thing catches their eye.

Aquarius Sagittarius How to Make it Work Compatibility Horoscope

The biggest problem this couple will have is not being able to hunker down and handle the boring stuff. This is everything from bills to remembering each other's birthdays. Because Aquarius Moon doesn't think conventions are necessary, and because Sagittarius Moon is simply disorganized, they have a hard time functioning, especially because they encourage each other to keep their heads in the clouds. 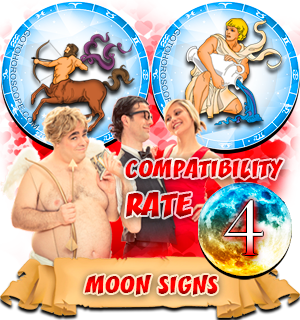 Sun sign compatibility will get you so far. Sure, you both like to live as you please, but can you live as you please and keep living? If you want to know if you are happy with Sagittarius Moon's need for speed, you must know if your Moon sign is compatible with this Moon sign. To determine if your Moon is in Sagittarius or Aquarius, put your birth date and birth time in our Natal Chart Calculator and do the same for your partner. 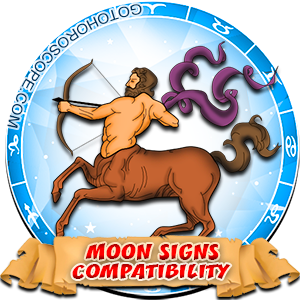 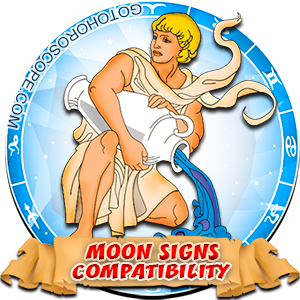