The Black Moon will become, probably, one of the few celestial bodies that influence the lives of this zodiac sign in 2016; it especially concerns financial aspect. It is important to note that positive and prospective opportunities lie ahead, which can lead to considerable improvements of your financial state. So, what are you expected to do to grab onto these opportunities? Noth-ing extraordinary, actually; all you need to do is to use your skills wisely, and act fast at the right moment. The beginning of the year, up until the first days of June will hardly bring you any surprises. Everything will take its course, your business is expected to grow gradually, but steadily. The situation, however, is a bit different for Cancer representatives, who do not have their own business. In this case you can expect a more dynamic development of events, though radical changes are not in question at this point. Your resources will experience an impressive quantitative growth, but it goes without saying that there is no need to spend all of your savings at once. You will definitely need those in the nearest future.

Up until the second half of September you can expect radical changes. The Black Moon will considerably increase its dynamic impact, that will reveal its influence in the enhancement of your empathic abilities. Of course, you shouldn't use this short-term but powerful gift to the detriment of others; but if your own good, that has nothing to do with others, is in question, why not take the bull by the horns? There's nothing wrong with turning in a politician for a bit, i.e. using the great power of speeches for reaching your goals. Of course, unlike a politician, you have to set a lot more humane and honest goals, otherwise your celestial protectors will decide not to go easy on you. On the whole, this is the best time for expanding your business. Invest as much resources as possible, but don't overwhelm yourself too much. Your prospects depend fully on how wisely your actions will be at this point, so you will have to stay on the lookout. Don't constrain your expenses, if you are absolutely sure that they will pay for them-selves in the end. If in doubt, don't rush, though you won't have that much time to think every-thing over. Don't even think of getting involved in some reckless schemes, even if you hear about those from reliable people. Even if a complete bargain is in question, even if someone has done it "a million times", there's no need to take this risk at the moment. Of course, every-thing depends on you, but in this case stars recommend quite clearly: avoid all sorts of shady schemes.

The time period between the second half of September and the beginning of December will bring you a new stage in the fight for a place in the sun. At this point a fresh burst of activity is expected and once again you will need to invest resources in your business. This time around you will have to be sneakier and a lot more considerate. Prospects will depend at this point not on the amount of investment, but on the reasonable strategy of its use. If in doubt, ask your "business involved" friends for advice. You shouldn't be ashamed of asking for help; it's better to admit your lack of experience in the first place, than declaring bankruptcy in the end.

2016 Horoscope for Cancer by spheres 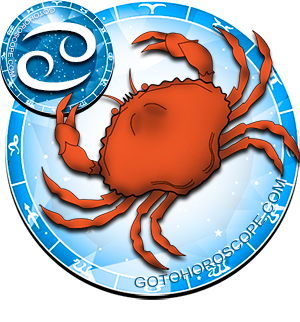 2016 Horoscope for the Zodiac sign Cancer for the MONKEY year

Love and Romance 2016 Horoscope for the Zodiac sign Cancer

Work and Career 2016 Horoscope for the Zodiac sign Cancer

Health and Wellness 2016 Horoscope for the Zodiac sign Cancer