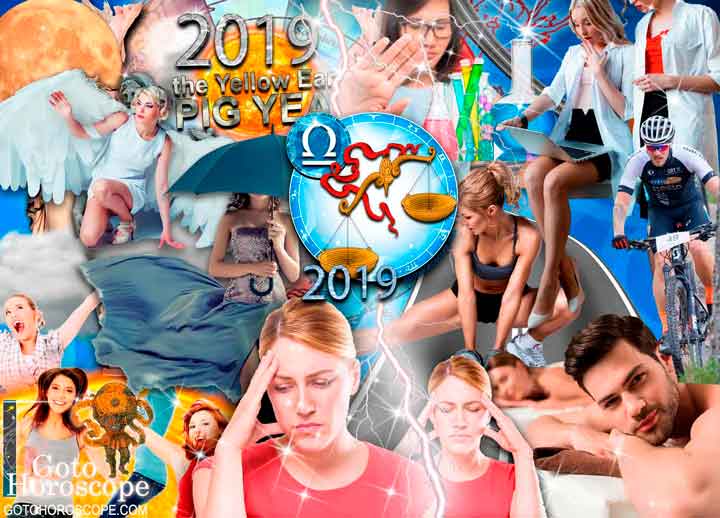 In general, this is a good trend, which says that Libra is really all positive and you have passed through difficult stages without any negative consequences. It can not be said that there will be many such stages, but they are likely, especially in the midst of spring and early autumn. At this time, the health horoscope for 2019 recommends that Libra take care, and if there is a choice that it is better to put on - the kit is warmer or more cool, you need to choose ... something means. Now moderation will become the main virtue of Libra, which will not allow neglecting the natural precautions, not only with respect to themselves, but also their immediate environment.

Since Libra usually does not have problems with establishing a balance between possibilities and necessity (although Libra traditionally thinks otherwise), 2019 will indeed be successful for representatives of your Zodiac sign. In the sense that, for example, at the beginning of the year you will be able to easily protect yourself from mass epidemics and other seasonal problems (including beriberi) with your immediate surroundings. For Libra with young children, this will be a particularly positive trend. Also, at the moment, those who have to take care of other people, for some reason or other, including the representatives of the older generation, should pay attention.

From this point of view, Libra will literally surround a beneficial aura that will help protect everyone who is somehow connected with you from health problems. Also, if Libra has long planned some serious surgery, or, perhaps, the passage of a long course of treatment, you will not find a better time than the summer and autumn of 2019. This again applies not only to yourself, but to your inner circle. However, it is necessary to approach the issue as responsibly as possible and take into account not only the recommendations of the horoscope, but, first and foremost, the qualified medical personnel in the relevant area of health.

The second half of 2019 as a whole will be more clear than the first, in the sense that here Libra will already understand how and from what risks they have saved themselves. For those representatives of your Zodiac sign who professionally engage in sports, the probability of a sports injury is reduced throughout the year, but especially in the second half of the year cycle. Here it is important not to risk and not overwork, but rather work only in the right rhythm. For those who are not involved in sports, but would very much like to make the first steps, this is best done in the early summer. This will be the most productive, and the first results will already be available by the end of the season. In general, for Libra, the period of 2019 is good from the point of view of physical self-improvement; one can even approach the question with frank fanaticism, but it is reasonable and thoughtful. The stars favor Libra in 2019 in terms of health and it makes sense to take advantage of this.

2019 Horoscope for the Zodiac sign Libra for the PIG year

Work and Career 2019 Horoscope for the Zodiac sign Libra