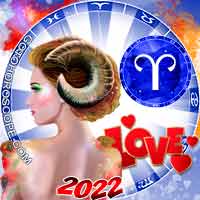 Aries, having Venus as the ruler of your 7th house has definitely a lot of benefits. She's the Goddess of Love and Union, and with her blessings, you really get to have the best she has to offer. If romance has been scarce this year, things are definitely going to feel a lot better. Even for those of you who already are in a relationship, this year can really freshen things up. Though, the only bad news is that the real-time for all these benedictions to shine is only later in the year. That's not to say that the early year doesn't have some good moments in store, but nothing compares to October, and you'll see why.

The main hurdle will happen in January while the Venus retrograde hits your 10th house. This also means that it would be squaring either your Sun, Ascendant, or Descendant, making the retrograde a lot more potent for Aries and other cardinal signs. This can be somewhat of a setback for pre-existing relationships. There might be some clash between your goals and aspirations with that of your partner. Issues could come along with the need to compromise on certain things. If you're single, maybe your focus on your goals just keeps getting in the way of any romance. Either way, this is a time for making choices and establishing priorities. Remember, relationships are all about the give and take, and even if you don't have one at the moment, putting time to work on yourself is already a big way to give to your future partner.

The melodrama doesn't last for long, however. Soon after Venus going direct, she'll be conjunct with Jupiter in Pisces in your 12th house. While the 12th place is not necessarily one for romance, Venus is still the ruler of your house of romance, so this could bring some interesting results. Since the 12th house deals with things that are not conscious to us, it could mean that there is some good news brewing outside from your point of reference. They could—and likely will—manifest a little later in the year. This is especially true if you know your birth time and you were born during the night.

Before we get to the golden month of the year for Aries relationships, we do have to address the ingress of Jupiter in your 1st house in May. This may not be valid for all of the Aries, but this can be an important transit if you have Venus or Jupiter himself in Libra, your 7th house. This would make this Jupiter transit oppose either of these planets in your 7th house. This could make you prone to receiving false promises. This is valid for both singles and coupled, but even more so if you're single and you happen to meet someone new around that time. Jupiter can be boastful and enthralling when he lets his trend towards grace get to his head— he's Zeus, after all. So, watch out for people who talk big, but don't have the action to back it up. You'll be glad you did.

Now, as promised, here's the best month of the year to get back to the dating scene or take the relationship to the next level. October, you have a Venus cazimi happening in your 7th house of relationships and matrimony. This transit hyper illuminates Venus and brings all the things she stands for to focus. This is peacemaking, sharing, partying, sensuality, luxury, and all those fun, exciting keywords. The fact that this is happening in your 7th house, makes it so she has even more say in your love life. Saturn will also be stationing direct at around that time in your 11th house by sign, which also promises some long-lasting opportunities. It's interesting to note that Saturn's position could symbolize a friendship turning into romance. Especially if you have any older and intellectual friend whom you've had a secret crush on for a while, things could happen.

This transit also comes in very handy for those who have been in a relationship and were thinking of getting married. Mercury's presence during this cazimi on the 22nd of October can add the idea of contracts and written word to the mix, and nothing represents Venusian love and Mercurial business better than marriage.

With that all out of the way, 2022 looks like it has some promising moments. Some may seem better at first glance than they actually are. But in the end, it all goes back to some good old Venusian, rose petals, and candlelit romance. Good luck on the New Year, Aries.

Through the Horoscope 2022 and astrological forecast for the year of Black Tiger, you can lift a veil of what we'll go through in the coming 2022 year, adopt its main characteristics and trends.