Overview of 2023 Astrological events that are vital for the fate of the Zodiac sign Libra during the course of the Black Water Rabbit Year. 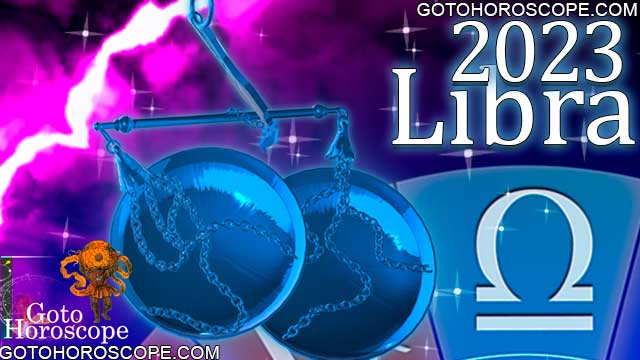 More often than not, Libra gets pinned down to the stereotype of always wanting things to be balanced. This propagates the false understanding that Libra only wants things to be easy and not challenging at all. That couldn't be farther from the truth.

Your sign is more than eager and capable of turning difficult situations into something beautiful and sometimes even profitable. The reason why I bring this up is that it's that very skill that will take you far this 2023. This is a year of many changes, and that push to establish harmony will be highly rewarded. You'll learn why through the course of this horoscope. But first, it's essential to look at how the year starts so we can build a solid foundation to take us forward.

The year starts with the tail end of the double retrograde of Mars and Mercury. This transit began at the end of the previous year, but it doesn't reach a resolution until the middle of January, so it's still important to address it.

This transit likely brought some difficulties in communication with your family. A perhaps more niche—but valuable—interpretation of this transit also targets those who are farmers or have professions related to cultivation or infrastructure. Especially if you have family living abroad, this transit was a rather tricky one. You'll want to spend a good chunk of January problem solving, especially if you have any travel plans in the first quarter of the month. While bringing these enterprises to a reasonable resolution will likely require a lot of patience, you can expect greater ease after January 18th since both Mercury and Mars will be moving forward by then. This is especially important for those who had their careers affected by the retrogrades since that will be one of the primary focuses of the significant transits happening later in the year.

What could these major transits possibly be, anyway?

The first big astrological event happens on March 7th with Saturn, the planet that's said to be exalted in Libra, moves on to your 6th house.

The 6th house is one of those places that can be a little tricky to interpret. Traditionally this is where we find troubles related to the body—such as sickness, though not always. Yet, for those who have planets in their 10th house, this situation changes drastically, and a place of difficulty becomes the place of perseverance through hard work. If you don't know whether you have planets in your 10th house or not, it would be wise to pay attention to both of these significations.

If we're talking about health, Saturn entering this house starts a 2.5-year cycle that will push you to take care of your body more seriously. Libras often run the risk of having trouble with toxin filtration in their body. This raises some red flags because Libras are also, more often than not, huge drinkers. With that said, it might be wise to cut down on alcohol intake for the duration of this transit. And not just alcohol, any other addictive substance like sugar, junk food and smokables.

If you do have planets in your 10th house, this transit can also symbolize a bigger push towards climbing that good old corporate ladder. Saturn almost always invites us to work on a particular area of our lives a little more complex. It bears the elemental qualities of dryness and cold. This means that the ringed planet is not mainly focused—or even cares—about our emotional state. It simply wants us to succeed at all costs. This is something to be very wary of since balance is always the key. You can expect opportunities to further your career (especially if you were born during the day), but don't let those come at the cost of your emotional wellbeing.

Speaking of emotions, Saturn is not the only external planet changing signs this year. Pluto, the most mutable and transformational of the planets, is also temporarily moving to your 5th house, of sex, pleasure, creativity and all things fun. As much as this is a temporary transit, it foreshadows a much longer 20-year long chapter in your life; Pluto is all about the big picture. This transit starts on March 23rd and goes all the way to June 11th.

This Pluto in the 5th house period can be both a blessing and a curse. The topics of the 5th house inarguably make the place one of the most fun and fascinating places in the chart. Though Pluto's tendency is to blow things up out of proportion. It will be essential to take this short preview of Pluto in your 5th house as a lesson so you don't get carried away doing nothing but partying for the next 20 years. That sounds awesome, but it comes with its complications.

During this period, you can expect intense romances and grand luxurious parties. On the other hand, since this is also the place of creativity, it would be a waste if you didn't use these energies to help further yourself in your development and make an impact in the world at large. Though since this is a shorter version of the 20-year chapter, you may only start these projects due to the amount of work it will actually take to achieve such a big feat. Remember Saturn? He's going to be rather helpful in this regard too. This transit becomes even more interesting when we consider that Pluto will retrograde back into your 4th house, inviting you to lay a more solid foundation before you can take this life-changing project.

Libra and 2023 are about to be best friends. It's all about passion and achievement, but I don't think it's all going to be easy. Get ready for an exciting yet steep climb. Good luck, Libra.