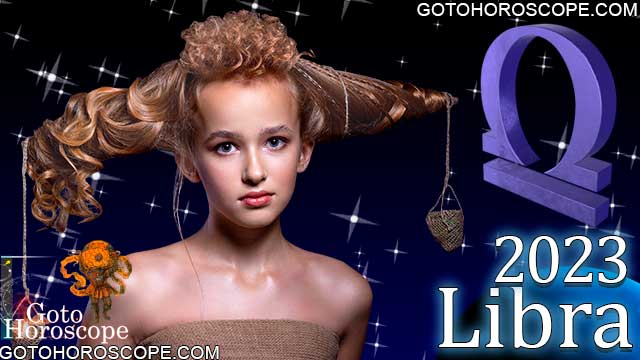 It's become a running joke on social media that Libras fall in love very quickly and have difficulty picking a partner. While that's not always true, some of those qualities certainly come from the fact that this is a Venus ruled sign we're dealing with. As the goddess of love, Venus makes those born under her sign quite interested in romantic and relational matters, but that doesn't have to be an arduous process.

Especially since you've had Jupiter transiting through your 7th house of partnerships and marriage for the better half of last year, this topic likely transpired quite smoothly for you. In 2023, Jupiter continues to transit through that house, though not for very long.

On the 16th of May, the largest planet in our solar system and bringer of good fortune will take its first steps into your 8th house.

The 8th house is not necessarily the most romantic of places. Some people would say that this is the house where we find sex and sensuality, but recent astrological discoveries prove that this is a mere historical misconception. In fact, what we often find in that place is your partner's finances, and therefore the resources you share with one another.

This is good news for those of you who are already in an established relationship, for Jupiter is especially prone to instigate a financial increase in the life of your significant other. This is even more true if you were born before sunset and are either 19, 31, 43, 55 or 67.

With that being said, if you are single, this transit can be entirely irrelevant for your romantic life. Instead, the planet we have to turn to is Mars.

Whether single or coupled, Mars is always the planet responsible for Libra's love life, and if you're ever trying to investigate or forecast what might be coming up, just pay attention to what Mars is doing. You're sure to gain some valuable insight.

The good news is that Mars ends his 2022 retrograde cycle right in January, meaning that while the year's inception can be a bit dry for romance, you won't have to worry about any retrogradation for another 2 years.

With the red planet moving faster than ever through the course of the year, we have a lot of room for positive action in your love life. Although, the best month of all has to be June, right in the northern hemisphere Summer. This is because, for the most part, that month will have Mars under the influence of the two most benefic planets in astrology: Jupiter and Venus. And to top it all up, this transit is happening in the 11th house, which is traditionally known as the House of Good Spirit, and the luckiest house in the whole chart.

This is often where we find events related to the community, big groups, parties, and exciting things. With that, we can only assume that this Summer will be the time for you to get out there and meet as many people as possible. One of them is bound to, at the very least, be a nice summer fling.

For those who aren't single, this transit can also be good for getting a little more social with your partner. Because your 11th house would be your partner's 5th (the house of bodily pleasure), you're also bound to exude an extra air of seduction through that month. Don't be afraid to use your natural Venusian skills to spice things up in the bedroom or to simply have nice dates to rekindle the flame of your relationship.

Like we said earlier, romance and Libra almost always go hand in hand, and 2023 is the year to make that even more of a prominent theme in your life. If you've been on a bit of a search, don't worry, as this year is rather promising. Get out there and find your person, Libra! Love is in the air.