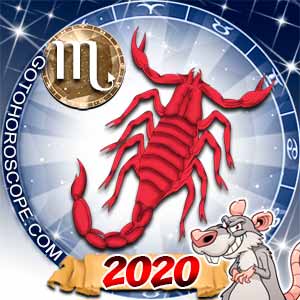 Astrology forecast for 2020, the year of the White Metal Rat. 2020 Horoscope for people born under the Scorpio Zodiac sign.

Is there anyone more appealing than a Scorpio? We think not, and history tends to agree with us on this. Leonardo DiCaprio, Katy PerryвЂ¦..so many famous Scorpios are out there oozing charisma, charm, and confidence. But you know this, Scorpio, and you've known it for ages. And wouldn't you know it, that's part of your charm: that self-confidence. It's gotten you through some terrible and sticky situations. We wouldn't suggest that that confidence is going to be rocked in 2020, Scorpio, but there are many changes in the year to come that you need to prepare for and we want to be the ones to help you do it. We know you're naturally clairvoyant and intuitive, but there's much going on in the cosmos that you couldn't be prepared for. There's more in heaven and Earth, Scorpio, then you've dreamt of. Don't feel bad that you haven't seen things coming. 2020 is going to be new territory for you.

There's one cosmic event that has big implications for Scorpio and that's the convergence of Jupiter and Saturn. This is going to have a huge impact on your life and you need to be prepared for it. That's how powerful you are, Scorpio: it takes the combined efforts of the two biggest planets in our solar system to make a possible dent in your confidence. And it's okay if your confidence falters. It happens to the best of us and that is in no way a sign of failure. What would be a failure is if you didn't learn from the experience of having your confidence shaken. And that's what this year is going to be for you, Scorpio: a big old 366-day learning experience. Jupiter and Saturn know this, but don't think they're doing it out of maliciousness. They're big planets, but they're not bullies. No, they're doing this because they think you're ready for the next steps in life.

This is going to be a trying year for you regarding employment, Scorpio. If you've been at the same job for a while, you're going to be pushed to level up at some point in the second quarter of 2020. Don't worry, there won't be any huge, terrible implications from this, but it's going to rock your world a bit. This is part of that confidence-testing mentioned earlier, if you couldn't tell. This is a very good thing. Maybe you've gotten a little complacent? It's okay, happens to the best of us, but we get it: it doesn't happen to YOU. Well, it might be high time that it did. Face the challenges that your job presents you and let the chips fall where they may. You might come out ahead and needing to work a little harder in the months to come. You might come up short and then it's time to move onto new challenges. Both outcomes are perfectly okay and good for you. The important thing is: no matter what happens on the job front, it's going to be good for you. You might be slightly uncomfortable for a very short period of time, but your life is going to be fine no matter what. And if all the outcomes lead to the same place, isn't it worth worrying about what's going to happen? Do your best and you'll be fine.

As far as finances go, that confidence of yours is going to serve you very well. This is going to be a rocky year for everyone as global uncertainty will no doubt cause people to make terrible and rash decisions that affect everyone else. But you, Scorpio? You'll be wise to listen to your own voice on money matters. We're not saying tune the world out and don't take any information in, but listen to what's going on and follow your own voice. You have never been one to follow a guru, financial or otherwise. 2020 should be no exception to this philosophy. Do what you think is right, especially towards the third quarter of the year. Keep your head about you, of course, but if there's an opportunity that your inner voice says it's a great one, well, you might give that little voice a listen. Trust yourself financially in ways you haven't before. You're a smart cookie, Scorpio.

You are going to want to keep a close eye on your health in 2020, Scorpio. Don't panic, We're not saying that there's anything terrible on the horizon. But we are saying you need to look out for number one. The best way to do that is to make sure you have a perfectly clean bill of health. Get yourself to the doctor first thing in January and get yourself squared away. You have too many other things to think about without worrying about your well-being. We know you're already in great shape and eating well, but this is the year to think about turning it up a notch. Watch for potential trouble in the early part of the year where you might need to get more rest than you think you need. Listen to your body, Scorpio. It's telling you its limits and what it needs. You've gotten so used to it doing everything you ask and this year is the first time where it might fight back a little. It's okay. Again, growth for you. Listen to your body and follow its voice. Take care of yourself and be good.

Scorpio, you saucy minx, you are near impossible to advise on love, but we are going to do our best to do so. This year is going to see you being your usual irresistible self until June or so. Did you just drop a coffee cup at the thought of you not being irresistible? Don't worry, your looks aren't going to suddenly fade or anything like that. But you will have an encounter with an immovable force in the form of someone who doesn't fall for your charms. They'll like you just fine - and you'll like them - but they won't like you as much as you think they should. Shocking! But this is one of those learning experiences we were talking about earlier. You are going to face this encounter directly and - yes - grow from it. If it was anyone else, we would say they'd be slightly humbled by that experience, but that doesn't seem accurate for you. It makes more sense to say you'll be challenged in the same way a chess genius is when they encounter an opponent they didn't expect to be beaten by. Love is a game, after all. Right now we're sure it doesn't sound appealing in the slightest, but you are going to be amazed at what it does for you. And think about how much sweeter every romantic encounter you have after that will be. And there will be romantic encounters aplenty after that, starting with the end of this year and going into next. And if you're already in a relationship, look to your current partner to challenge you in a very helpful way. Don't worry, it's not bad. It's an indication that they think you're a good person to have around. Which, of course, you are.

Sorry if this all sounds dark and foreboding, Scorpio, because there's a lot of joy ahead for you in 2020. It's going to come your way no matter what, so there's really nothing you need to do for it. And that's a wonderful bounty: whenever things get especially tough, just know that you'll have joyful things coming to you without you lifting a finger. Most other signs have to work to see the joy in things but not you. You'll have the equivalent of gifts just falling into your lap. And that's especially good as you will be working hard on a number of different fronts. You're going to be very challenged this year, so we want you to enjoy every one of those gifts as they arrive for you. In fact, they'll be that much sweeter because of all the trials and tribulations you'll be facing.

You are an irresistible force, Scorpio. You could stop ships with your charisma and presence. This is never going to change, no matter what the universe throws at you. And that's what's perfect about you, so when we say the universe is going to throw a lot at you, you should know it's out of love. You are strong and ready for any challenge coming your way. The only person who needs to be convinced of this you. And that's why all this is happening: the planets want you to know what you're capable of, so they're throwing you all these tests. Clearly, Jupiter and Saturn think the (ahem) world of you or they wouldn't bother to put you through these paces. You've got this, we promise. You're going to come out of 2020 prepared to face anything whatsoever. And you'll appreciate the things you have that much more.