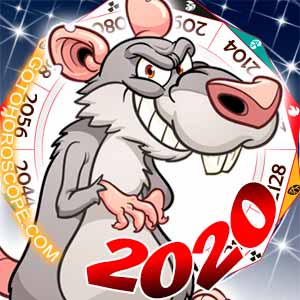 The 2020 year brings the arrival of the White Metal Rat, a celestial being of such power that it casts great effect over every sign of the zodiac during its period.

The mechanism for numbering years on the Western calendar is largely arbitrary, 2020 is no exemption. One numbering system works one way, but another from the other side of the planet works another. You can do all sorts of mathematical backbending to try to find connections between the different numerical systems but at the end of the day, they're just going to be different. What is significant is that a number of cultures all over the planet recognize that the year we call 2020 is going to be very significant. Some cultures call it the beginning of the end, or the start of some new era. What everyone does have in common is a sense that this will be a year of great changes.

2020 brings the arrival of the White Metal Rat, a celestial being of such power that it casts great effect over every sign of the zodiac. This animal is the instrument of change, especially when backed by the Dog and Dragon. What will this mean for us, terrestrial dwellers? Think of these creatures as being like a giant cosmic army. At the front are the legions of dogs and dragons, laying waste to anything in their way. Behind them is their leader: a king rat, brandishing a sword. It's an odd and magical image, but also a portentous one. The Rat ushers in great change wherever he goes in the cosmos. Think of him as a giant stellar hurricane. But rather than be completely destructive, this Rat plays with the fabric of space and time. This leaves us standing in his wake, but everything around us will change drastically.

At the start of the year, many waves of change will hit this planet like a massive tidal wave, affecting some signs more than others. Dog, Rat, and Monkey will feel it strongest, weathering change so strong they will have to develop new tools and skills to deal with it. Pig and Rooster will get off easiest, but they will see many tumultuous changes for friends and loved ones. Look for a lot of anxiety across many signs as they navigate treacherous waters.

Employment is going to be shaky for a number of the signs. The financial outlook for the world is going to resemble a giant valley: from January to the middle of the year the outlook is going to slowly get more and more negative, then slowly climb up as it heads to December. June is going to be a time for great economic upheavals that could cause all sorts of panic. This could be people losing their jobs, having trouble finding jobs, or a great reduction in resources and hours. Change is looming in every industry. But these changes might not be so bad. All signs should see this as a potential opportunity for new vistas and possibly pursuing paths less traveled. The Horse especially has many great opportunities waiting for them should they choose to pursue them.

Some of those opportunities might be creative pursuits. If there was ever a year for following artistic whims that have been lying dormant, 2020 would be the one. If you've had any desire to make visual art for a local gallery, put together your album for Bandcamp, or write the Great American Novel, don't put it off any longer. Make the time to sprawl artistically and don't make excuses to avoid it. This is the year for investing in that part of you. It will pay off in great dividends in the years that follow.

February is a quick respite from the chaos of January, but it's not without its own chaos. Goat and Ox will find great opportunities at this time that could lead to exciting adventures in the months ahead. All of the signs will need to watch for challenges coming in the months to follow. If there's anyone who should lead, find the Tiger. They will be the voice of reason emerging from the chaos surrounding everyone. Don't follow the Tiger blindly, but do give them a listen and the benefit of the doubt.

Spring renewal in nature and a refreshed love for most, but some will be buckling down and attending to the gifts the universe is giving them. Rooster and rabbit may be squirrelled away in their workspaces, trying to pull ahead and make their dreams real, so don't look for them running in meadows with loved ones. The other signs will fall under spring's spell and have an awakening (or reawakening) of dormant emotions for either existing partners or potentially new ones. Look for mid-May to be the peak time of emotional expression for everyone, no matter what emotion they're feeling at that time.

Every dog has his day, and the Dog has June. This is the time for that majestic mammal to ascend into the sky, covering the other signs with its benevolence. June and July are when the stars give an added boost of energy to everyone for whatever tasks they need to accomplish. Every sign will have its own mission during this time, so the extra celestial energy will be appreciated. Look to mid-July to be a peak of planetary chaos, slowly starting to ebb down in the weeks that follow it. Early July will see increased instability and strongly irrational reactions from people at large. Keep an eye on your environment.

A wave of calm will hit the planet in August. It will hit quietly but slowly build in intensity. This doesn't mean passivity and quiet, though. It will mean some time for reflection and beginning to put plans into action. For those who need to sift through the wreckage of any sort post-chaos, this is the time to eliminate debris and begin rebuilding. Mid-August will be a perfect time for celebrations and joyful activities. Reach out to friends and family as the month progresses. Don't ignore your job, but this would be the time other parts of your life should take a higher priority.

The autumn is a time for reflection put into action, and plans to be reworked if the year has gotten off track. Horse and Monkey will be ascendent and guiding everyone to put the nose to the grindstone and chive on. There's a lot of work for everyone to accomplish and the pacing is key. A wave of health concerns are on the horizon at this time but easily stopped with vigilance. In the wake of financial struggles earlier in the year, many are cautious, if not slightly stingy. This is an excellent time to invest or start a new business. Has there been a passion project you've had simmering in your head for a while? Even something that doesn't seem like would make much (if any) money? September and October are when you need to make those dreams a reality, or at least start the ball rolling. If it's an artistic endeavor, make sure to schedule a time to work on it and set a deadline to make it public. If you're thinking about a side hustle, get that setup and start the dirty work of finding customers. It's going to be dry for a while, but this is the time to do the legwork for it. The stars are saying they want to see more of you and more of you succeeding. Don't disappoint them.

November and December and when everyone's hard work will be put to the test. Some people will have unexpected challenges confronting them, others will have their work culminate is some large final presentation. Everyone will be focusing their energies on improving as people and trying to level up in preparation for 2021. Look to your families and loved ones for a bit of extra support and make sure you return the favor. Reach out to people you've lost touch with and make sure you're available to support them in whatever way you can. Nerves will be frayed and no one will be getting enough sleep, so give a wide berth to everyone you encounter. Remember: you never know other people's full story.

2020 is going to be a chaotic and crazy year for everyone on the planet, no matter which calendar you're following. If the chaos completely surrounds the planet, what can anyone do about it? Very little except learn how to respond to the changes. Keep your head and stay rational. Prepare yourself for anything and everything. Odds are good you have people you trust; strong people who lead naturally. Emulate them in their confidence and calm. And who knows? Someone else might be looking to you to be confident and strong (spoiler alert: they are).

"Change" is the spirit animal for the year. Forces beyond human control will shape our destinies in ways we couldn't imagine. So what can we do? Like always, humans adapt to change and grow. 2020 is a tremendous year for personal growth in the face of numerous challenges. We shall become stronger people by doing the hard work that prepares for 2021.