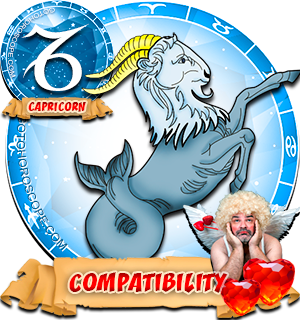 Compatibility Horoscope for Combination of Capricorn and Aquarius Zodiac Signs.

Capricorn man, having met with Aquarius woman, will love her independence and desire for freedom. These zodiac signs will be together, as if out of curiosity: what lies behind the partner's secret identity, what unknown depths does she conceal in herself? The compatibility horoscope of a Capricorn man and Aquarius woman ambiguously claims that their union can be a real challenge for each other. They are dissimilar personalities who will fight for every inch of territory. They can make a lot of mistakes if Capricorn man would not be tolerant, and Aquarius woman calmer.

Zodiac sign Capricorn is a conservative. He always knows what to say and how to correctly act. He firmly stands on the ground with both feet, he is not peculiar to wool-gathering, flirting, romantic aura of words, as he believes they are nonsense. At the time of the meeting with an Aquarius woman, he has chilled her extravaganza a little bit, was that stone wall behind which women love to hide, and she has loved him for the reliability and thoroughness of opinions.

Zodiac sign Aquarius is like a balloon: at the first wind blast, it is ready to fly to distant lands. Lightweight and light-hearted, the Aquarius woman tries to embrace the whole world through feelings and emotions. The Capricorn man captured her spirit at first - he can be relied on, he is for her that foundation on which one can cling so that the next wind blast will not throw her too far away.

Capricorn man's conservatism with time will be very annoying to an Aquarius woman. He will always return her to earth, tell her how to act correctly, and dictate his terms. Capricorn man hardly changes his views, he cannot act without reflecting on his actions. In turn, he is irritated by Aquarius woman's carelessness that she is easily thrown from side to side. Aquarius woman wants her lover to be a bit softer and light-hearted so that he could sometimes make surprises and speak words of love to her. But she must understand that it is impossible to change a Capricorn man - one can only pull him out of balance, and the consequences will be very destructive.

The right thing to do is to take him for what he is. There is no need of constantly pestering him with requests and persuasions - Capricorn man likes to stay alone with himself, thinking about plans and analyzing what has been done. She should learn to see his vulnerable soul under a feigned seriousness and help him because all he does is meant to help the family.

The compatibility horoscope advises: humor is the best means of establishing contact with a Capricorn man. Humor is perhaps the only key able to open up the door a little bit into the mysteries of a serious Capricorn man. 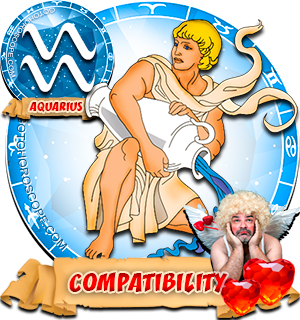 I am with a Capricorn man and am.an aquarius , He is my absolute soulmate , We were meant to be together and have proven this by making big changes in both of our lives ,we live 300 miles from each other but are about to buy our dream house halfway between both our families , we are madly in love , something I thought would never happen to me ! But it is true , when you know you just know xx
[Reply] [Reply with quote] [Cancel reply]
2017-09-11 01:41:03

Uhmmm....your all correct...the cap guys are really good at stimulating the mind which i find this attractive and they are pretty shy(i love that...well well am attracted to my cap friend and i sense his attracted to me too..buh as an aqua woman i like to be realistic i don't decieve myself with irrelevant things....

I love family and uhmm my career...and am pretty funny and to sum this up am an extrovert....lucks aqua ladies in winning his heart

Aquarius woman and I have been dating my capricorn man for about 6 months now. I have known him practicality my whole life. There is something about him that makes me want to come back for more. He stimulates my mind in way no other has done for me. Our conversations are just fantastic and it makes me want to know more. Cap men are very reserved and keep their feelings to themselves all the time. They are more into actions more than words. When he looks into my eyes I can see that he genuinely cares for me. I've been trying to court him for 6 months and he has still said he is trying to get to know me. All of his traits are ones I can see myself spending my life with. He can be very shy at times (which i find rather attractive), and I always try to make him laugh cause I noticed when I do that he lets his guard down. I honestly love the chase it has made me respect him even more to know that I have to follow him in this relationship. With aquarius woman we are always the ones to do the running so this is different and in a good way. I am at an age where I feel like settling down with a good man and I know in my heart I found my match. I look forward to seeing us spending our lives together. Oh ya by the way he was chasing me for 18yrs before we got together.
[Reply] [Reply with quote] [Cancel reply]
Capricorn Man 2015-12-13 07:11:26

I am a Capricorn guy in a relationship with an Aquarius girl and i am not controlling. I usually just accept what she wants and do my best to do whatever she ask. But i do feel that a lot of it is true.
[Reply] [Reply with quote] [Cancel reply]
Joyce 2015-08-31 01:39:37

My late-husband (capricorn) and I (aquarius) had an outstanding marriage lasting 32 years until his death.
I am now dating a capricorn man and our relationship is outstanding!
[Reply] [Reply with quote] [Cancel reply]
Cp man 2015-08-04 14:01:27

my two sisters married Capricorn men both were controlling and had affairs not easy men too live with both divorced after being controlled for years
[Reply] [Reply with quote] [Cancel reply]
shell 2015-04-15 18:40:51

I'm aquarian woman an my Capicorn man well lets say it was instant hand holding, talking, laughing, smiling, looking into each others eyes.....then I felt like distance all of a sudden but it wasn't I realize he's cautious..and extemly extremly patient... which has taught me more patience (one of my weakness on somethings) yes not verbally with his feelings but I see it and feel it when he looks at me, pulls me into him and hugs and holds me...our intimancy times its so strong...our communication took some teeking but as long as we communicate that we both fully understand he is so supportive and patient with me and I return the same with him. I did walk away from him in the beginning, but he wouldn;t let me go and he has shown and proven himself and I have grown more in love with him,,we are taking our time but he has taken down those walls and I am open to him... as he has opened up more to me.... I am ready for this venture with my Capicorn man <3
[Reply] [Reply with quote] [Cancel reply]
Sonya 2015-03-06 16:42:40

IDK what to say about this Capricorn man i really like. its like a weird attraction towards each other, we almost have this silent love that we try to control, well he actually. being an aqua girl i sense things and know he really likes me but hes so careful to show me as if I'm not trustworthy or afraid to hurt him.hes very sensitive and i would have to be very careful of what i do and what i say around him, which is very frustrating but I love the mystery behind him. I'm very social and hes very cautious and conservative. In the beginning we had something going but a lot of haters around the workplace was overwhelming, so we kinda backed off.he once well three times told me that i GOT it. i asked what do you want from me, he said everything. with him u have to listen to what he say because even though he barely speak, when he do, it means a thousand words. he also held my hand and said im trying to ATTRACT something, KEEP THAT IN MIND. We hugged a lot. the flirting is amazing and the eye contact,omg i cant explain it, his smile brightens me. I know have to be VERY VERY patient AS HE WILL TEST ME in all ways. being that I'm an aqua girl, i love to be stimulated by the mind and he is doing a great job at it i must say

i love my capricone so much though smtms there is a space in him which i dont understand but still hes an amazing man. He's a workaholic which i hate so much n in some way he loves freedom as i do. Hes silently intelligent and loyal. Hes not apparantly romantic but when he does he melts my heart. Im almost like anytg dscribed bot an aqua gal and hes been so patient on me. Once i read that an aqua gal is one kinda gal who can tolerate a cap guy, i think i hv done that too for him. Smtms our dfrences are too much but we still love each other so much. We ve been togther for almost four years now. I wish hes my soulmate from God.
[Reply] [Reply with quote] [Cancel reply]
Nikki 2014-06-23 17:45:08

This is definitely a very hard pairing. I am an Aquarian woman and I have been dating a Capricorn man for about a couple of months. At first glance, I thought it may be a match made in heaven. It only took a few weeks for me to come back down to earth. This is a very hard man to please. He likes things his way and he is very inconsistent. He likes things his way and he will not budge. I spend most of my time not saying much about anything worthwhile. Our conversations are stuck on how was your day and what separate plans we have for the day. I have not let go yet, not sure why.
[Reply] [Reply with quote] [Cancel reply]
Bling T 2015-01-23 00:45:29

Actually I am in the same boat too

And still wondering "what a hack am I doing with him"

I'm an Aquarius and the love of my life is a Capricorn we have a lot in common so not every thing about how Aquarius and Capricorns shouldn't be together is true
[Reply] [Reply with quote] [Cancel reply]
Bukiwe koli 2014-06-09 13:28:55

try not to plz him

I think all aquarius females should wear an amulet to stAY AWAY FROM CAPRICORN,S UNCHANGEABLE ,UNMANAGEABLE,STUCK TO HIS GROUND, DIFFICULT, UNRESOLVABLE MAN. Why is it that with only one pull out of his life balance these men type consequences can be destructive yet aquarius women have to remain flexible with these types of men. my advise Sail away by ENYA. and just give him a little bang.

Yes so true. Hot attraction at first but then destruction. I did bang him and the experience was awful. I love to have fun in bed, be naughty but he was to serious. Did not work at all. Next please.
[Reply] [Reply with quote] [Cancel reply]