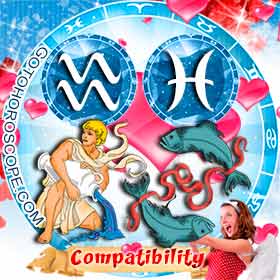 There is one sure thing about an Aquarius – Pisces combination; there is never a dull moment. This is a pairing that pushes the limits of both partners. Pisces desires connection and tenderness while the Water-Bearer is detached and aloof. These extreme differences may seem insurmountable, but with patience and understanding, Aquarius and the Fish can add a lot to one other’s lives. 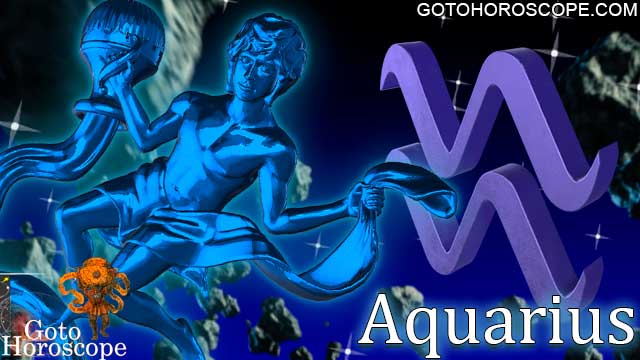 A typical Air Sign, Aquarius is remote and analytical. The Water-Bearer is far more interested in intellect than emotions. In fact, feelings are somewhat alien to Aquarius and something the reserved Water-Bearer has become adept at avoiding. As a result of this, Aquarius has developed an easy-going temperament, but just on the surface. In truth, this laid-back attitude is adopted to help the Water-Bearer escape drama.

In apparent contrast to its trepidation when dealing with emotions, Aquarius is deeply drawn to humanitarian causes. However, the reason for this becomes clearer upon closer examination. Philanthropy deals with humanity as a whole and does not require the connection a relationship with an actual person would. This allows Aquarius’s to maintain its lofty role of surveying humankind from an impersonal height. 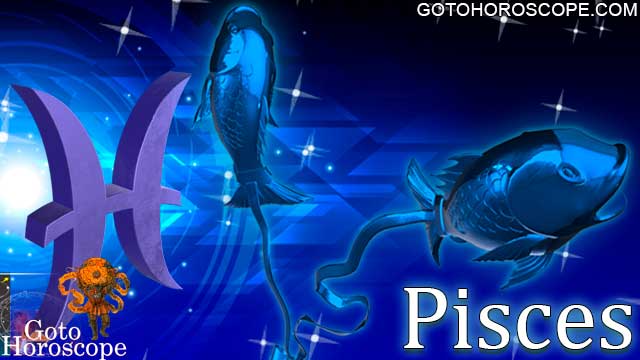 Pisces sees the world through the ever-shifting lens of emotion. Everything in the Fish’s domain - past, present, and future - is a constantly changing kaleidoscope of feelings. A once pleasant memory can actually become painful to Pisces in the circumstances of the moment. Once this is understood, it’s hardly surprising that Pisces seeks to escape these pressures. While the Fish sometimes accomplishes this with pleasure-seeking and addictive substances, it is just as likely Pisces will disappear into the much simpler world in its own head.

Devotion is the most suitable word to describe the Fish’s approach to love. Pisces is a born romantic and adores gestures such as gifts and mushy poems. Pisces likes to give as well as receive. The Fish often takes on the task of keeping love alive and well in a relationship. With all this emotional overload, Pisces doesn’t have much of a grasp on the real world, which makes it impressionable and easy to manipulate. The Fish often makes poor love choices early in life and this makes it very hard for Pisces to trust subsequent partners. 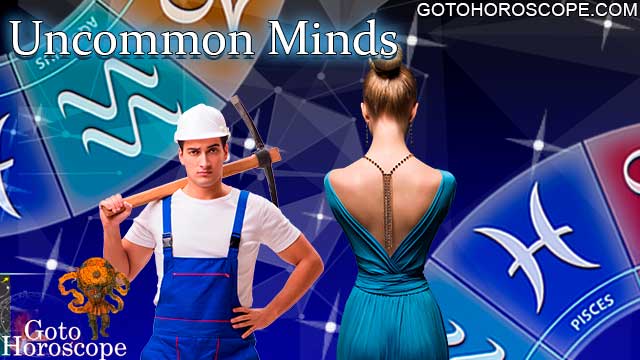 What happens when eccentric Aquarius joins with mystical Pisces? It’s anyone’s guess. It might seem this match is doomed from the start, but these utterly opposite partners can offer one another much needed support in weak areas. Their originality of thought will bring them together initially and the Fish’s imaginative lovemaking will add another dimension to the relationship. While this is not an easy pairing, the benefits it brings to both partners are worth the effort.

Both the Water-Bearer and the Fish often feel the need to escape. Aquarius retreats from emotion and Pisces retreats from reality. Despite these differences, their parallel needs allow the couple to be understanding with one another’s occasional lack of presence in the relationship.

The Fish is a dreamer, but has much trouble bringing its dreams to life. The real world is very hard for Pisces to grasp. The analytical mind of the Water-Bearer is much more adept at seeing a process from start to finish. Aquarius can use this ability to help its mate successfully bring the Fish’s dream sphere into the outside world. In return, Pisces will gladly help the Water-Bearer gain new insights into its own charitable mission.

Aquarius greatly benefits from the Fish’s willingness to explore feelings as well as its acceptance of others. Aquarius generally avoids emotions, not because the Water-Bearer doesn’t experience them, but because it doesn’t know what to do with them. No feeling is off limits with Pisces, and the Fish is perfectly capable of handling even the most tumultuous outburst. Aquarius is unlikely to test the Fish’s limits in this way, the Water-Bearer appreciates the freedom it affords. 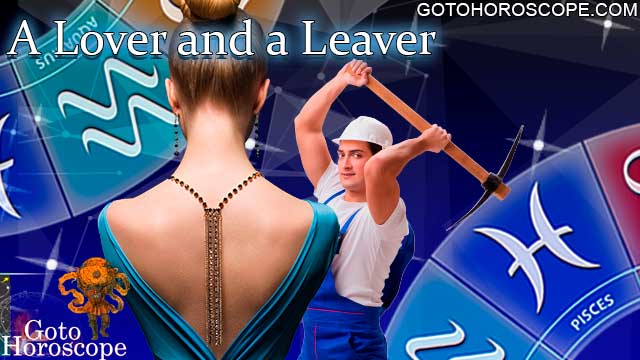 A Lover and a Leaver

While Aquarius and Pisces can make it work, there’s no denying their disparity in emotional capacity put a strain on the couple. Detached and assertive Aquarius finds Pisces too emotional and oversentimental. The Water-Bearer will have a hard time dealing with all the emotive excess that comes from the Fish. In return, Pisces finds Aquarius stony and difficult to fathom. The Fish’s empathic abilities rely on feelings, not logic, and the Water-Bearer doesn’t let its emotions off the leash very often.

Along with their emotional differences, Pisces and Aquarius deal with the world in nearly opposite manners as well. The Water-Bearer is practical and assertive while the Fish is dreamy and impressionable. Since, unlike Pisces, empathy isn’t high on the list of Aquarius’s traits, it may be very difficult for the Water-Bearer to refrain from dominating the vulnerable Fish. Pisces will instinctively understand when its mate has little respect for it. While it might seem that this should drive the Fish away from the relationship, loyal Pisces will not physically leave, but will emotionally escape with hedonism and by retreating into its dreamworld.

Pisces may not be liable to leaving, but Aquarius has no such restraint. If the Water-Bearer feels overwhelmed in a relationship, it will leave first by withdrawing affections. If the circumstances that are causing the discomfort endure, Aquarius will simply walk away without a backward glance. Once the obstinate Water-Bearer has made this decision, there will be no way of reversing it. 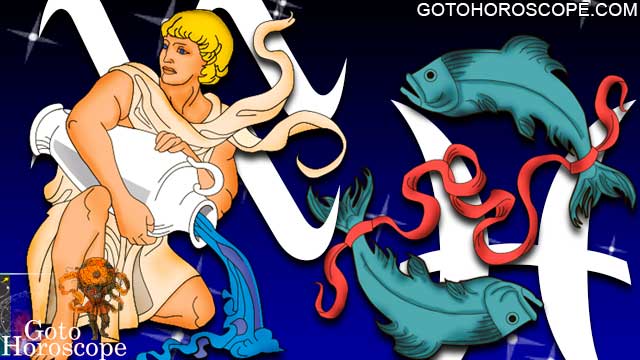 A Challenge in Spades

The difficulties of an Aquarius – Pisces blend are surely significant but not insurmountable. The pair can find common ground in their love of the unusual and their deep thoughts. Aquarius can offer Pisces a stable foundation on which the Fish can realize its vision. Pisces offers the Water-Bearer the freedom to express any emotion openly and without censure. Danger to the relationship arises if Aquarius loses respect for the Fish and withdraws. Pisces cannot bear the coldness that follows and reacts passionately, which only pushes the Water-Bearer away further and faster. If Aquarius can learn to be more gentle and Pisces can reign in some of the emotional excess, the two have a great deal they can learn from one another.

Zodiac Compatibility - Find out how the Love Relationship of Aquarius and Pisces look like when combining with other members of the Zodiac circle. How Compatible Aquarius and Pisces in their pairs are when matched with different Star signs and how they manage to maintain the Love Harmony with their loved ones.