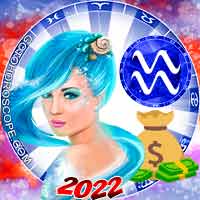 I hope you're ready for this year coming up. Going from what the astrology is saying, you might have a bit of a love and hate relationship with the year. As much as Aquarius may be having some rougher times in other areas of life, this nice influx of money coming will help make navigating this tough terrain a little easier. This is primarily due to Jupiter, which will be transiting through your 2nd house for the first quarter of the year. With that said, those of you who were born during the day will mostly feel the impact of this transit. Still, around April, Venus cojoins Jupiter in the same house, bringing an even bigger blessing for Aquarians all around.

Knowing that things are about to hit an upswing, the question here is how to use these newly acquired resources. It's important to not get overly excited because, like aforementioned, there are still some other transits that can make things unstable. The primary being the Saturn and Uranus square happening between your 1st and 4th house later in October. You had a few of these squares in February and June of 2021 that might've caused some issues pertaining to the family or your home life. Whatever it was, there may be something similar coming back up. Get prepared for that. It could be something that requires a good amount of money to be solved. The blessings of the early year may be coming for a reason.

Another series of transits you might want to pay attention to are the eclipses of June and November. Since they're happening in your 10th house, they may somehow affect your career or your means of earning money. There might need to be a readjustment of plans to advance. It might be shaky, but ultimately things will work out in the end. This might be another situation that's good to save up for.

On a more positive note, the Jupiter retrograde happening later in the year could end up being quite the positive transit for you. It sends Jupiter back into your 2nd house, so you may see a replay of that same positive cash flow. Though, since this is a retrograde, it may be a smaller amount than the earlier one, or the resources may not come in the form of money but a way to earn it. Either way, expect things to get much better financially at around this time. Just beware of how much you spend on holidays.

2022, in the moment, may feel like a rollercoaster. Chaotic, but ultimately, fun. Even when things look like they're going wild, Aquarius is definitely still going up. All you have to do to guarantee success is be aware that fertile and propitious moments come and go. Take advantage of the times when money is not a problem to get ready for those when it is. Your finances are definitely going to be the more positive area of your chart this year, so use that knowledge wisely.

Through the Horoscope 2022 and astrological forecast for the year of Black Tiger, you can lift a veil of what we'll go through in the coming 2022 year, adopt its main characteristics and trends.