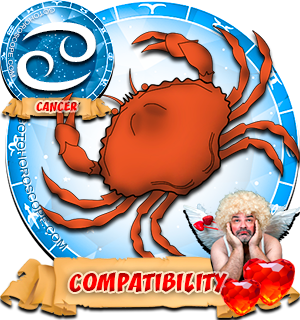 Compatibility Horoscope for Combination of Cancer and Libra Zodiac Signs.

According to the compatibility horoscope, one can trace that the Cancer man and Libra woman are completely different, and strangers to each other as people. It is almost impossible to achieve harmony in their guardian elements - Water and Air. These zodiac signs are in different astrological planes, and it would be better if they had not met each other on the road.

But they have already met, and each of them thought that he/she loves the other the way she/he is. Their convergence of views, their agreement and sometimes 'similarity' of characters are not more than just a coincidence like their first encounter. Chain of systematic coincidences led the Cancer man and Libra woman to marry and suddenly abandoned their union, leaving them with a mass of contradictions alone. In this union, hostility and conflict accompany any of their actions. Sometimes they feel fatigue from constant confrontation and make a temporary truce. In periods of artificial peace, sometimes both may think that at last, their family has the long-awaited peace, which they craved for from the beginning of their relationship, but soon the opposition will begin again.

Libra woman often experiences swings in her mood, she is inclined to doubt, hesitant in activities and tries for a long time to think about every little thing. Cancer man can, in passing, wound her delicate nature, from which she will suffer severely and is prone to long-term depression. Libra woman may experience frequent emotional upsets because she tends to absorb everything that happens. She forms a huge inferiority complex, which puts pressure on her, causing her to deeply worry about this. Libra woman almost never initiates divorce: she is infinitely basting in her options for addressing the problem and sees no way out. For it is easier to leave everything as it is and suffer than to take a decision that will cut this Gordian knot. Cancer man also suffers due to lack of agreement within the family. His loved one's depression will infuriate him, he feels that she is using her rueful feelings to purposely drive him into a corner and will be angry. The Cancer man in this couple will quickly decide to divorce.

Libra woman will very patiently wait for any decision of her lover. And, if she will be able to win the Cancer man with comfort, smooth attitude, and mild manners, then this couple, as suggested by the compatibility horoscope, has some chance to form a completely peaceful union. 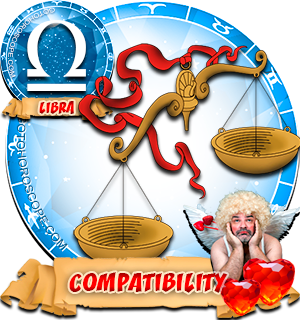 Phumi 2017-12-15 09:03:18
👍 +1 👎
This is very true, I dated a cancer man for about a year, He was jealous, lacked communication and intelligence, expected more that he was giving, did not like change, too emotional/clingy for my liking. I just couldn't deal with it. Also liked ordering me around. He was good just not for me.
Me 2017-09-27 13:07:11
👍 +2 👎
I don't understand the jealousy thing. I'm "dating" a cancer man and I'm a libra woman. He never gets jealous, barely. The only time he showed a sign of it was when he left me a small almost unnoticeable hickey. For some reason my two friends knew what it was. He was a bit upset that they knew my body that well (both were male). Otherwise, he loves that I make good money and get compliments.
mich 2017-07-16 06:26:55
👍 +1 👎
i dated a cancer that was unhappily married,it started so fast he professed his love to me made me fall hard he was so perfect id never believe it would ever happen that smile charm his love for me talk about kids together i was and still in love was,nt long before he cut all ties and have,nt heard from him since.when love is strong and sweet libra woman will fall to his feet and for his sake you'll give all and nothing take and next thing you know you wait for him but he's nowhere because now he retreats.Now your left with a broken heart that never mends.like i said theres a love for them like no other unexplainable but its one you just dont forget.
Tsg 2017-04-15 19:25:22
👍 +1 👎
I am with a. Cancer man this is our 2nd time around the first time was 27 years ago and after we lost each other back then both our lives took a downward spit.. he has this time around turned my whole life right side up yes he's controlling... I like it he knows what he wants... he reads me even my voice... he wants me to be strong and upbeat and positive not beat down like he found me and we have the same goals ... I love him with all my heart and yes he can be moody but so can I so that's when we both know to be quiet and let it pass not to take it out on one another... we would have destroyed each other years ago had we not split up back then but now I believe we are in the same page we have both gone thru hell and back
ZMM 2018-09-18 04:57:16
👍 +1 👎
I literally went through the same. We are now talking again. Trying to see if we can make it work.
Jojo 2017-01-11 06:49:01
👍 0 👎
It's so true about cancer guy eating away at your self respect, self esteem and confidence. Been married to one for 22yrs and it was hell. Before kids he treated me like I'm his world, gradually his narcissistic attitude would appear. He plays at lot of mind games, unpredictable mood swings where I was treading on eggshells, selfish and chauvinistic. Now met another cancer and crabby as hell.
Bobbyjay 2016-12-14 12:42:27
👍 -7 👎
I'm a libra woman who is has been seeing this Cancer Man for 4 months. He's extremely attractive, cocky, opinionated ,Sensitive, loving, possessive and clingy. I adore him but we seem to debate/argue to much. We both want to be boss. I'm a free spirit and want change and a friend/boyfriend he wants me to take care of him like a traditional mum/wife would... sometimes I want to escape his pinching claws but he pulls me in closer!
libra 2016-01-22 07:45:05
👍 0 👎
I have been dating a cancer man for 1 yr 7 mnt
I am 17 nw and he is 20
At first he ws really sweet and adorable
I found myself deeply into him ..
Then after we gave our virginity he changed
I tried to hold him but it didnt work so i moved on
But after 1 mnth of break up he is again all over doing the same thing he is bck into my life but i am confused
Do he deserve a second chance !?

jay 2017-07-20 19:35:27
👍 -1 👎
you should think about the things you do or don't do, also most comments on here are one sided ,.its extremely hard to understand a cancer mans motives etc I think this is the main problem in these stories on this site tbh ,..takes a strong sign to understand us cancers one that is understandable considerate and selfless .and the lack of understanding of your cancer man seems to be the biggest problems ,..abit selfish maybe, relationship's take cooperation and this b.s about cancer men jealous about the Libra woman's position in the work force ,.b.s most cancer are employed we want for nothing form no one we are no stranger to earning money or succeeding in work ,..
E! 2015-06-19 21:12:51
👍 +3 👎
I am a Libra woman married to a Cancer man. Cancer men are very selfish and controlling and always need their attitudes put in check. They are like a cancer that will eat away at you and when there is nothing left, they will leave you.

If they are having a bad day, it is taken out on you (that makes them feel better).

Many of them want you to take care of them. If you are beautiful, they will not compliment you because they want to be the center of attention.

If they want you, they will make you feel like you are the only person in their world until they have you were they want you and then they will destroy you little by little.